A look at the history surrounding The Trafalgar Way. What was happening in 1805 when the Battle of Trafalgar took place?

Why was the Battle of Trafalgar important?

By 1801, Napoleon Bonaparte has achieved unchallenged military supremacy all over Europe. The continent holds its breath as the fragile Peace of Amiens prevails until in May 1803, England declares war on France. Napoleon begins preparations for all-out invasion, amassing his Grande Arm Angleterre, together with a flotilla of 2,000 invasion barges at Boulogne and other channel ports. Key to his plan is a concentration of Franco-Spanish Naval forces in the English Channel, strong enough to sweep aside the Royal Navy. 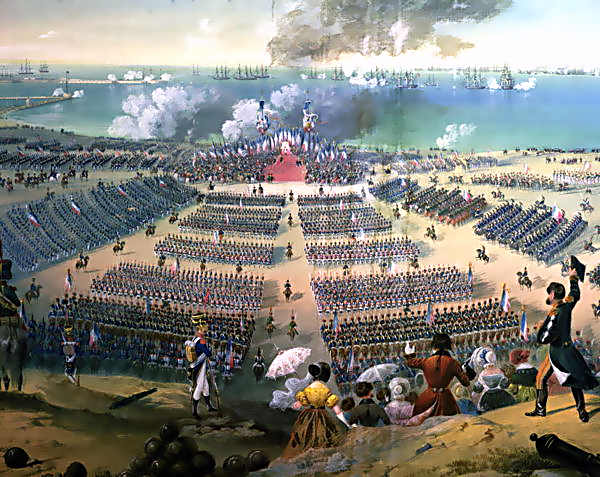 Inspecting the troops at Boulogne, 15th August 1804
Napoleon had to gain naval control of the English Channel. In his own words, "Let us be masters of the Channel for six hours and we are masters of the world." The strategy failed after his fleet was engaged in a skirmish  ('Calder's Action') off Cape Finisterre in July 1805, and his invasion army had left for France's eastern borders by October 1805. However by then, Nelson and the Fleet were already at sea under orders to eliminate the threat and Trafalgar was the battle which would seal this outcome.
This terror before Trafalgar poses a real and imminent danger, and a worried England looks to the Royal Navy, particularly Vice Admiral Horatio Nelson, to counter this threat. Commanding the prestigious Mediterranean Fleet, Nelson spends two years playing cat and mouse with the French and Spanish fleets, his plan being to engage them in battle. In spring 1805, the fleet in Toulon manages to escape, crossing the Atlantic and joining with other French ships also sailing to the West Indies. There, the plan is to return in overwhelming numbers to protect the invasion flotilla.

Nelson gives chase and foils the plan. He warns the Admiralty to strengthen the Western Squadron and on 22nd July 1805, Admiral Sir Robert Calder engages the returning Franco-Spanish fleet. The fleet retreats bound for Cadiz. Nevertheless, the combined fleet of 33 ships continues to pose a threat and Nelson is dispatched with a task force with orders to neutralise it.

"If Admiral Villeneuve, instead of entering Ferrol, had contented himself with rallying at the Spanish squadron, and had sailed for Brest to join Admiral Gantheaume, my army would have landed; it would have been all over with England." These were the rueful words of Napoleon on 8th September 1815. The threat had been very real. 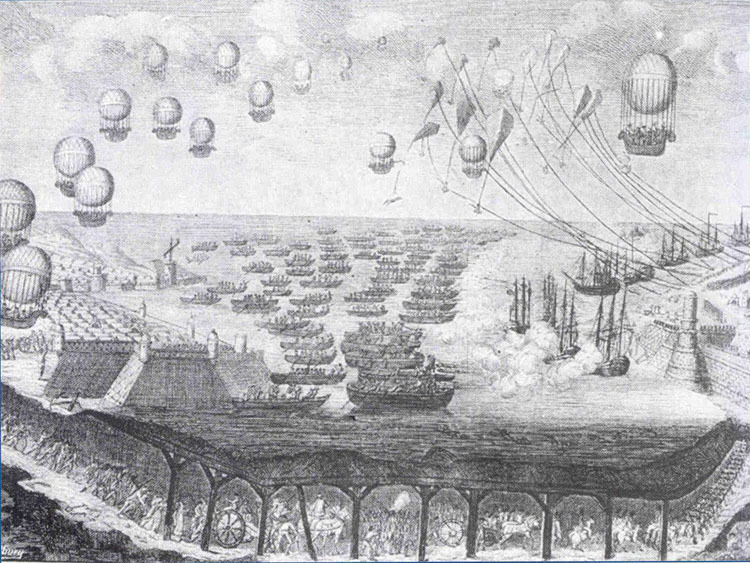 Invasion 1805: this cartoon image depicts some of the less conventional and more sensational suggestions for how Napoleon might invade the British Isles. A surprise attack via a Channel tunnel was proposed; and hot air balloons with a payload of armed personnel and weaponry; there was even a very serious proposal by an American inventor to supply three-man submarines to assist the invasion effort. The first successful test of these was carried out in 1800 in the River Seine.
This, then is the context for the events of 1805: a nation on high alert against attack from Europe's ambitious dictator. Every man, woman and child is aware of the threat and everyone follows news of military action and leaders, including Horatio Nelson, who was probably Britain's greatest celebrity of the day. 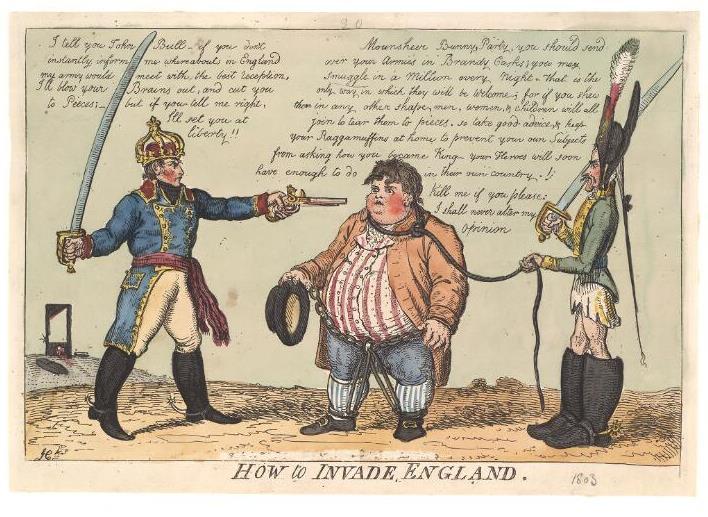 "How to invade England"
Satirical cartoons of the time reflecting the nation's full awareness that Napoleon Bonaparte (or "Bunny Party" as this cartoon had it) had his sights set on occupation of British soil.

Why were the Spanish fleet joining in with Napoleon?

Spain and France had been allies against the British Empire since the second treaty of Il Defonso in 1796. In 1800 they signed a third treaty which promised the exchange of Louisiana in North America plus "...six ships of war in good condition built for seventy-four guns, armed and equipped and ready to receive French crews and supplies" by Spain in return for France guaranteeing them lands in Italy, possibly the whole of Tuscany.
When hostilities against the newly created United Kingdom of Great Britain and Ireland resumed in 1803, Napoleon demanded the ships or an equivalent cash payment to assist his war effort. Spain balked and was given an ultimatum by Napoleon: pay the subsidy, declare war on Great Britain alongside France, or have France declare war on Spain. When Spain reluctantly opted to pay Napoleon in cash, Britain took this as a declaration of war in any case. The British government issued warnings that Spain should desist from ongoing war preparations in its ports. When this did not happen, a British squadron was sent to intercept four Spanish treasure ships coming into Cadiz. The ships were taken or destroyed in a pre-emptive action (the Battle of Cape Santa Maria, 5th October 1804) that was at the same time lucrative and illegal. Outraged, Spain declared war on Britain and joined forces with France.