What is a post-chaise? How does this relate to the postal system today? And who were the postboys? Read on to find out just how well-established Britain's system of post-carriages was by 1805, and how familiar Lapenotiere and other messengers would have been with using them.
The following article is adapted from a piece originally written for Carriage Driving magazine in March 2005 by David Inkel. 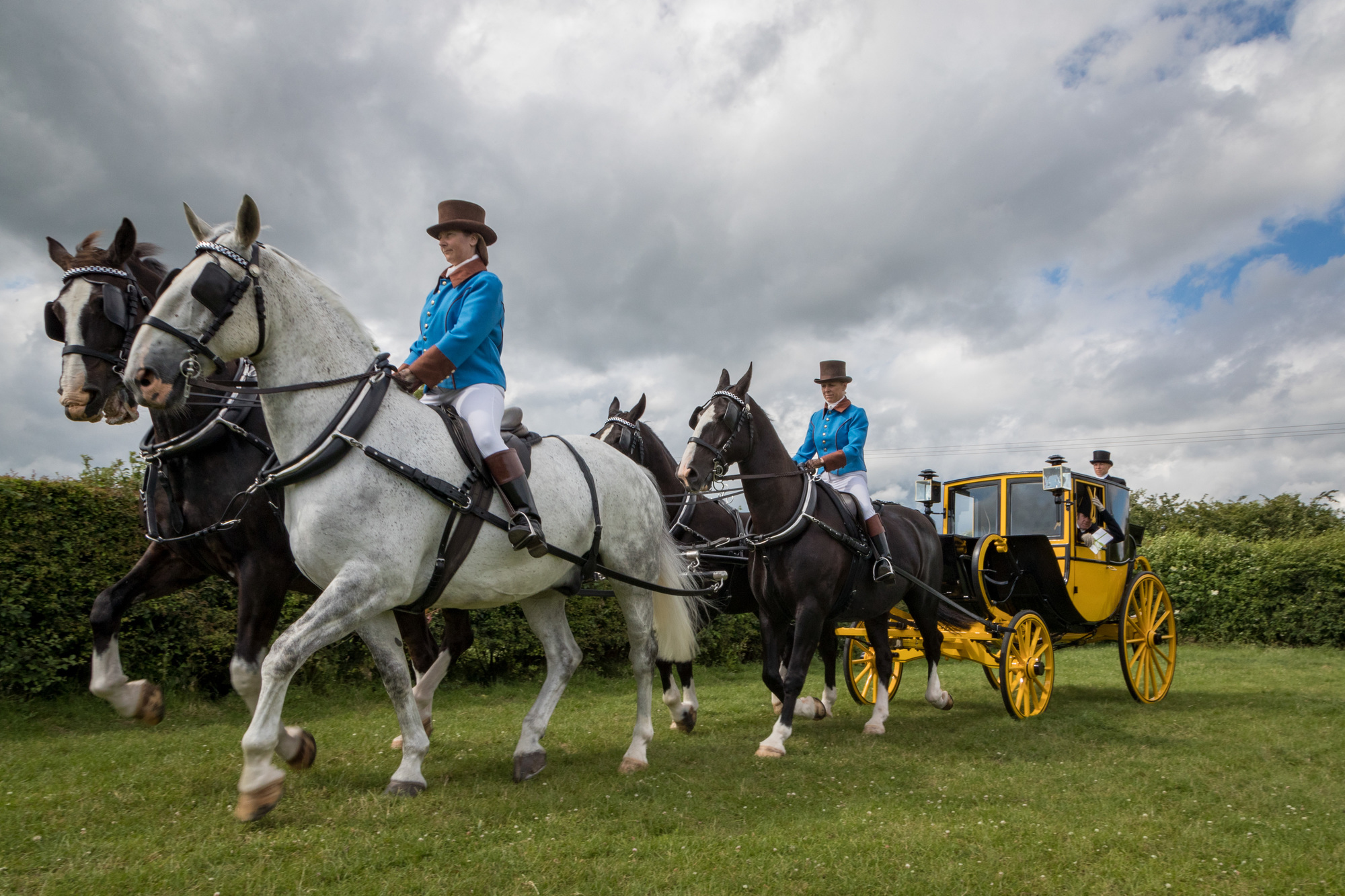 The fastest way from A to B
In 1805, the post-chaise express would have been the fastest means for a passenger to be conveyed from one place to another.

The word 'post' has Latin origins connected with the placing of an upright timber on which to fix public notices. Hence the verb to post (or publish) information at a conspicuous, known location. A post thus came to be linked to a set place, or station, where information was exchanged or conveyed. In the Middle Ages there were several early postal systems where court couriers or heralds carried the King's letters and the medieval Latin for these couriers was caballarii postarus, riders of the posts. This King's Messenger service developed most rapidly after 1500, when Tudor monarchs dealing with increasing continental interests, as well as revolts at home, decided to create the position of Master of the King's Posts to improve communications. The duty of the Master of the King's Posts was to set up known, defined posts on certain major roads at intervals of ten to fifteen miles. At these posts, horses would be stationed night and day to facilitate the onward transmission up or down the road of the King's Messengers: fresh horses and perhaps riders would be available to continue.

At first the responsibility for establishing and managing the men and horses at these posts fell to the local mayors, constables and bailiffs of the selected towns and boroughs. As time went on and traffic increased, the duty seems to have been gradually passed over to the local inns, the innkeeper assuming the task of local postmaster. For their services they received a retaining fee and payment per mile for the horses and guides provided. In time, the innkeeper was granted the monopoly of letting out horses for hire to all travellers on that road, whether on their own or the King's business.

term posting establishment to describe a facility for travellers wishing to hire riding horses or carriage horses, with or without carriages, continued long after the introduction of the dedicated mail coach service had altered conditions for the innkeeping 'postmaster'.

So, what is a post-chaise?

In its earliest form a chaise (French for 'chair') was a light vehicle on two wheels built as a seat mounted on a light framework with long, springy shafts. French 17th century chaise de poste was similar but later designs had enclosed, panelled bodywork with a door in the front. y were not coachman- or owner-driven vehicles but were 'ride and drive', each pair of horses ridden and led by a postillion/postilion or 'post-boy/postboy'. NB for the purposes of consistency across our website we will use the spellings 'postillion' and 'postboy' throughout.

Travelling by post had been commonplace in , and the better roads of other continental countries, for some years before its introduction into . In 1743 John Trull, an English artillery officer, obtained a patent for the renting of travelling carriages. first vehicle adopted for use in was an enclosed two-wheeler, with a bottom hinged door. post-chaise's general design and translated name (pronounced 'post-chase' in English) came straight from the French chaise de poste. A pair of shafts was provided for the driven horse, whilst the horse ridden by the postillion was attached to a swingletree only. This meant that the postillion's horse, having neither shaft nor pole, could not assist in holding back the carriage when going downhill.

In carriage design the English tended to be short on invention, but their talent for improvement was their strength. In the case of the English post-chaise this was achieved by simply substituting a pole for the shaft and swingletree, resulting in an evenly harnessed pair-horse configuration, whereby both wheel (pair of horses closest to the carriage wheels) horses now had equal control in holding back the carriage when required.

nearside horse carried a riding saddle, whilst the offside horse was equipped with standard pair horse harness, although with shortened reins, which came together to form a single rein for the postboy to hold in his right hand. To protect the rider against possible limb damage if the riding horse moved over against the pole, he had an iron halfguard or 'false leg' strapped to the outside of his right leg and also covering his foot.

English post-chaise soon evolved further and, like Chapman's improved Hansom cab, it kept the name but looked little like the original French carriage. It became a variant of a new and original design, the English coupé, literally a cut coach, mounted on whip springs or cee springs and usually upon a single perch undercarriage.

closed demi-coach body contained a single forward facing seat, usually for two passengers. (Some contemporary accounts by travellers using a post-chaise of this period mention seating for three.) In each side of the body there was a typical coach door with window and shutters. front of the body also had a full-width window with two glasses which could be separately lowered.

This coupé or chariot design existed under several different names, with varying minor features depending on its intended use. coachman-driven nobleman's State or Dress chariot and the slightly lesser appointed Town chariot have no connection with posting, unlike the Travelling or private posting chariot and the Post-chaise version. Travelling chariot had a removable coachman's seat, thus it could be used by its gentleman owner for posting and only necessitated the hiring of postboys and their horses. 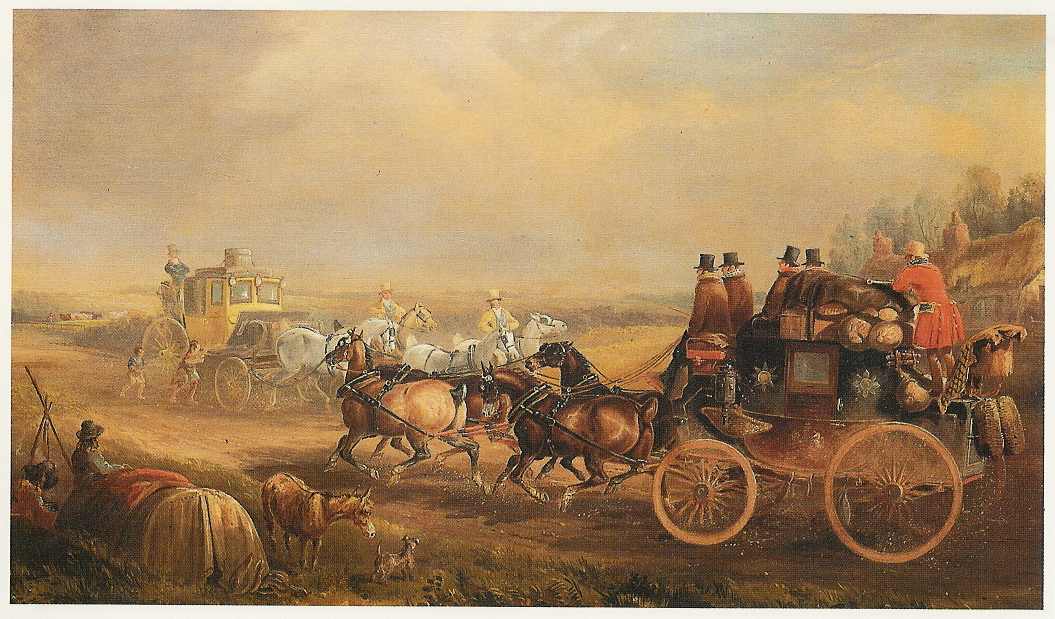 Post-chaise, always intended to be postillion-driven, had no coachman's seat and was available for hire, complete with postboys and horses, at any posting establishment. Luggage could be carried on a platform between the rear springs and likewise in front of the body where the coachman's box would have otherwise  been. Some post-chaises seem to have been fitted with a light, shallow imperial (case) on the roof for additional storage. front windows afforded a good view of the road and countryside ahead, the left seat offering a more restricted view "obstructed somewhat by the bobbing postboy" but, in any case, a superior view to that had by an insider travelling in a stagecoach.

A fast, generally comfortable, private and fairly immediate way to travel, at an average speed of between eight and ten miles an hour, the post-chaise could be likened in many ways to the modern taxi, unfortunately including the expense! charge per mile for hiring two horses and one post boy was typically eighteen pence. other way of travelling long distance was by stage or mail coach. se were generally slower, at least in the mid-18th century, ran to a set timetable and route and the traveller had no choice in respect of the company of his fellow passengers. Rather like the difference between a taxi cab and a bus.

Was it an uncomfortable way to ride?

The carriage of the post-chaise is suspended on leather straps which enable it to swing gently in all directions, providing a simple form of suspension. It would probably have caused motion sickness in travellers! So it wasn't a particularly jolting form of travel. The passenger was protected from the elements and had a good view of the passing landscape. It may have been a bit chilly in winter, but all in all was probably a reasonably comfortable way to travel.

success of the system of travelling by post was undoubtedly down to the management of the posting establishments. There was a degree of legislation, as illustrated by the £10 fine levied, in 1789, on a postmaster near Oakham for failing to write upon a stamp ticket the destination of three horses he had let for the purpose of travelling post along the North road, but mostly the innkeepers/postmasters ran a tight ship.  post-horse proprietors, all keepers of inns and hotels, would keep thirty or forty pairs of horses in their stables. To each four horses there would be a postboy and a cad, overseen by an experienced ostler.

Turn and turn about

If there were ten boys and ten cads (assistant postboys) to forty pairs of horses, for example, each pair of horses and their postboy would go out in turn. If business was good and all postboys were out, and another carriage arrived then the second pair of horses belonging to the first pair would be sent out 'in turn' and driven by the first cad. Should he meet the postboy to whom the horses belonged, returning home, the carriage was stopped and the boys quickly changed places. cad was paid a tariff proportional to that which the postboy had received and dependant upon how far along the postboy's journey they had met.

This then was the efficient system, which allowed Lieutenant Lapenotiere to deliver his Trafalgar news with such speed in 1805. Several decades later the slow spread of the railway caused not only the decline of coaching and the inns but also eventually caused the collapse of travel by post and the demise of the post-chaise. 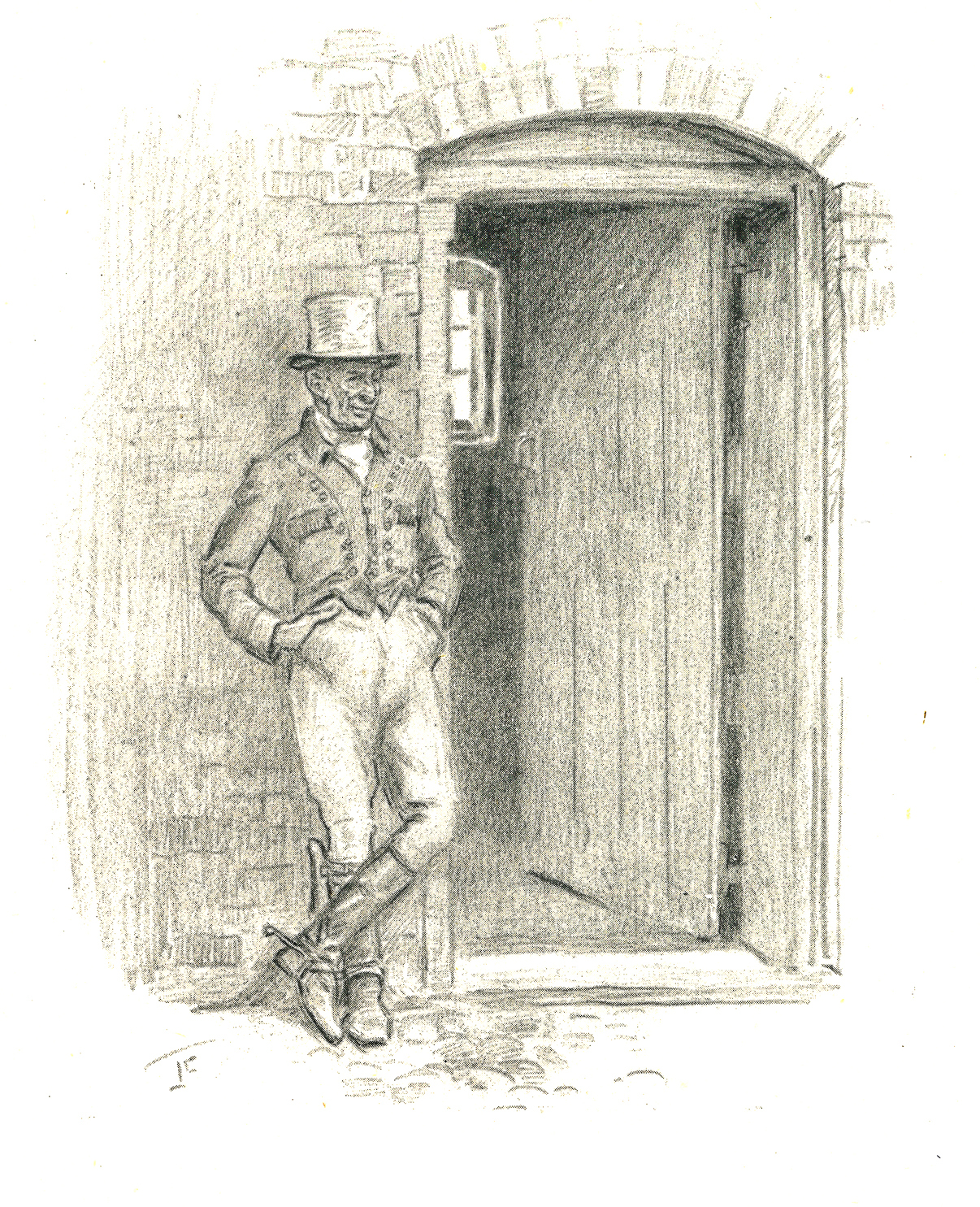 Smartly presented
Postboys had smart liveries, in spite of their sweaty, dirty work in all weathers.

The postboys were 'boys' in name only, many being grey-haired and some in their sixties. They were a strong, small, hardy race of men about the same stature as a modern jockey. Often 'characters', they were sometimes the sons of retired postboys and learned how to drive by riding the leaders and taking instruction from an experienced wheel-boy behind.
Driving skills had to be honed to perfection to obtain the maximum efficiency from the horses since, unlike four-in-hand teams where the work can be evenly divided between four horses, in a postillion pair the hand horse does a high percentage of the pulling, the ridden horse having to contend with an extra eight or ten stone of postboy.  Being rare judges of character, the postboys knew who would enjoy being driven fast and therefore give a handsome tip and, on the other hand, had to drive an elderly lady slowly to elicit a similar tip (given for 'careful driving').
The postboy's uniform was both smart and practical. They all wore beaver hats, mostly white although a few establishments went for black. Their jackets were light blue or yellow in the main and occasionally of scarlet cloth. Their breeches were of the whitest corduroy, with brown-topped boots. Some old hands had twice the usual number of buttons on their breeches to facilitate opening the breeches higher above the knee in order to easily put on dry stockings and boots after a good splashing if the breeches themselves were still dry and clean.  Greatcoats were either put on the dickey seat or strapped to the front cee-spring of the post-chaise. They were slit up to the waist with long tails. The front part was tucked under the knees and the hind part doubled under over the thigh. Thus the greatcoat did not overheat the riding horse, nor get spoilt by the horse sweating.
At any time there were several postboys on the lookout for trade at the door of the posting-house. Their jackets hung in the stable room but otherwise they were ready dressed, booted and spurred awaiting the ostler's call to mount up and present themselves to any oncoming carriage. To protect their uniform whilst waiting, the boys wore an overall white smock, buttoned up to the neck and reaching their ankles.