Lapenotiere was not the only messenger hurrying to deliver news to The Admiralty. Another naval officer was hot on his heels...

History has recognised the role of Lt John Richards Lapenotiere in safely delivering the official dispatches from Trafalgar. Documents show that he was not the only messenger making the journey London-bound. Just how did Captain John Sykes become involved, what motivated him to continue the journey to London, and what were the circumstances which led to Lapenotiere arriving at The Admiralty just minutes before his fellow officer? 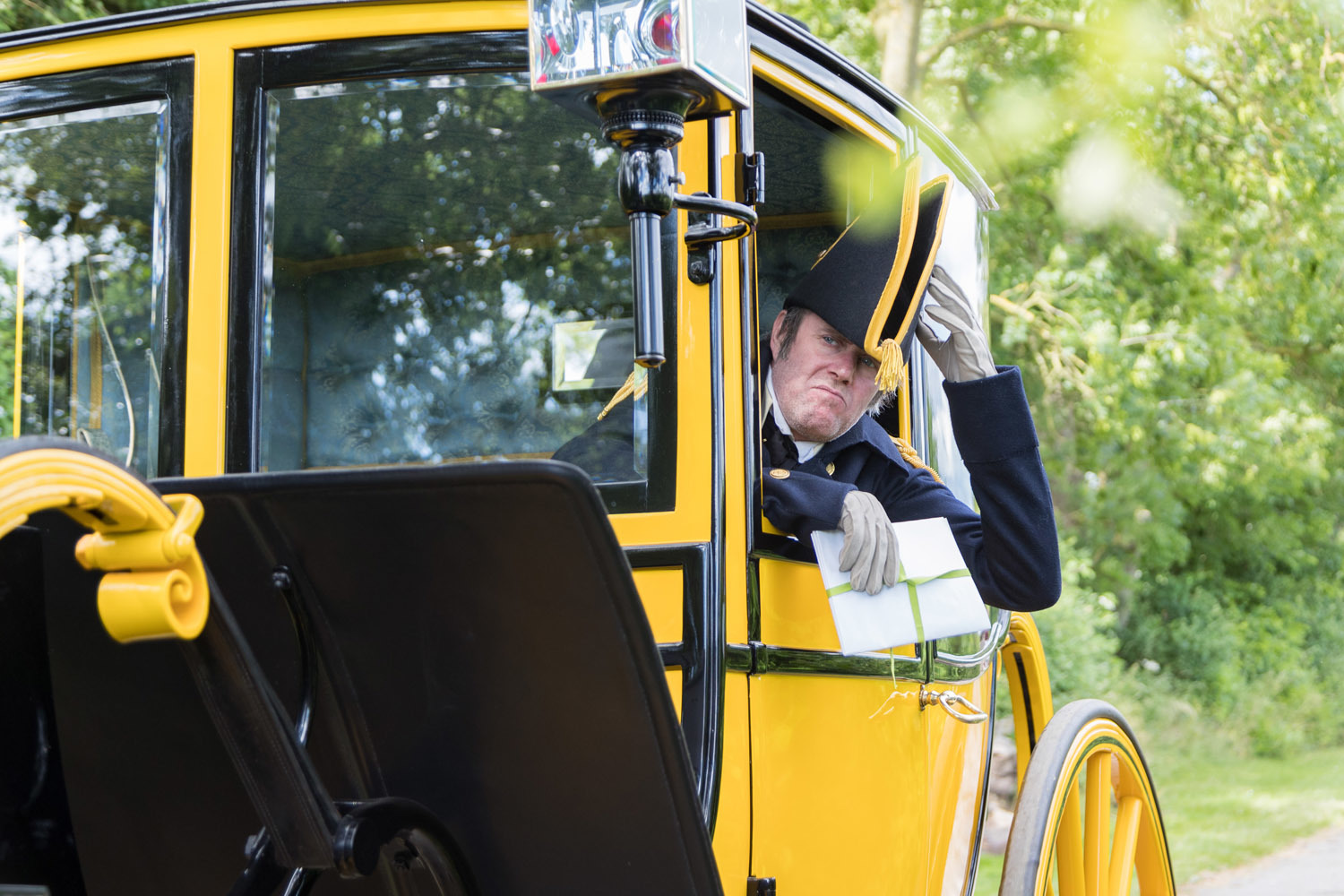 Lapenotiere and Sykes both took 'post-chaises express'
Did Lapenotiere know that Sykes was racing with him to deliver the news of Trafalgar? Eye-witness accounts suggest he did.

As Pickle sets sail for London with the official Trafalgar dispatches on board, Commander Sykes is following Nelson's orders to patrol off the south-west coast of Portugal, at Cape St. Vincent. The Commander-in-Chief had previously intercepted Nautilus heading for London with dispatches from Collingwood on 25th September 1805 and commanded him instead to stay put, look out for enemy vessels and instruct following ships on where to find the rest of the fleet.

Travelling westward from Trafalgar on 28th October, the Pickle approaches Cape St. Vincent, and, after having been spotted by the Nautilus, is chased down. Coded identification signals are exchanged, and Lapenotiere and Sykes have a two-hour meeting on board Pickle. This in itself is quite unusual. The normal protocol would have been for Lapenotiere to go aboard Nautilus.

We can only imagine the conversation between the two commanders as their ships sail north in company. Sykes records that Lapenotiere has given him a note saying that he has 'received positive orders not to be detained by any Vessel - if any ship should come up with Pickle I am desired to request the ship to send her boat as my Despatches are of the greatest consequence.' Furthermore, Lapenotiere's note continues, 'the Admiral said something to me about your going to Lisbon but what I know not on recollection he said I was not to be detained.' It certainly sounds as if Lapenotiere has been frustratedly trying to carry on with his mission and that Sykes has been making a case for taking over delivery of the dispatches himself.

After having heard described the events of the battle and Lapenotiere's instructions, Sykes decides to abandon his orders and accompany Lapenotiere. He writes dispatches of his own and asks a Portuguese vessel to take them into Lisbon. There is no evidence they were ever delivered.

From a copy of his message to Vice Admiral Collingwood, we know that Sykes explains his decision thus:

"I have ventured to proceed, solely activated by a zeal for the service, and in hopes to meet your wishes on the occasion, in becoming a security for the information of the Pickle should any accident befall her."

It is easy to paint Sykes as a villain who wanted some of the glory (and reward) of delivering this news for himself, however the situation is hardly so clear-cut. With the destruction of the combined fleet, the Nautilus's purpose in its patrol was rendered obsolete. He could remain on station and await new orders, but what if the Pickle was destroyed, and it became known that the Nautilus had encountered her and had done nothing to help speed the dispatches safely to England?

In the absence of new orders, Sykes had to anticipate what Collingwood would want him to do in his situation. He could rejoin the Vice-Admiral and request new orders, or he could assist the Pickle in delivering the news to the Admiralty.

We know he chose the latter option. Later on the 29th October, Lapenotiere glimpses Nautilus's sail some distance astern as they pass Burling Island. He knows then that Sykes has not gone into Lisbon as requested, and that the race is on.

By dawn on 4th November, Pickle is dropping her anchor off Falmouth. It is not until 8.30pm that evening that Nautilus arrives in Plymouth. We can estimate that by this time, Lapenotiere is already in his post-chaise and en route, somewhere on the challenging, bleak highways of eastern Cornwall. In Plymouth, Sykes goes ashore and seeks out Vice-Admiral Young, the Commander-in-Chief at Plymouth, on board his flagship Salvador del Mundo, and regales him with the momentous news he has picked up from Lapenotiere. With no sign of Pickle or Lapenotiere, and realistic concern that they may have been lost at sea or taken by the French, Young writes a set of dispatches congratulating the Admiralty on their great victory and sends Sykes off in a post-chaise express for London.

Pickle is finally spotted outside Plymouth at first light on 5th November, by which time both Lapenotiere and Sykes are set on their London-bound trajectory over land via Exeter, and onwards through Dorset.

It must have been very slow going over Dartmoor and through Devon to Exeter, even with four horses. We can estimate that Lapenotiere was making less than 7 miles per hour over this long, arduous stretch. He probably reached Exeter at around dawn on 5th November, and Sykes' timings on the road up from Plymouth through the small hours can not have been too dissimilar.
What is intriguing is that we know that around noon on that day, TWO sets of post-chaise were hurtling into Dorchester, only an hour or so apart. Captain Robert Tomlinson wrote to his brother in London what he had witnessed:
"On Tuesday 5th November at about noon, two officers of the navy came through this town, following each other, at about an hour's space of time, in two post-chaises and four horses to each, from the westward; the first reported that he brought good news of great importance, and the second, that his despatches contained the best and most capital news that the nation ever experienced."
Who is leading at this point? Since Sykes is now carrying the dispatches written for him by Young, it's hard to say who was whom. However, a certain logic suggests that Sykes might at this point have been ahead of Lapenotiere. Whoever was travelling at an hour's remove from the leading post-chaise would surely have known that the other was ahead. If Sykes had discovered that Lapenotiere had successfully reached England and was ahead on the road, would he have pursued him all the way to London with great vigour, determined still to close the gap? Conversely, if Lapenotiere was second at this point, he would have been spurred on, possibly with great fury, to learn that Sykes was about to steal his thunder. 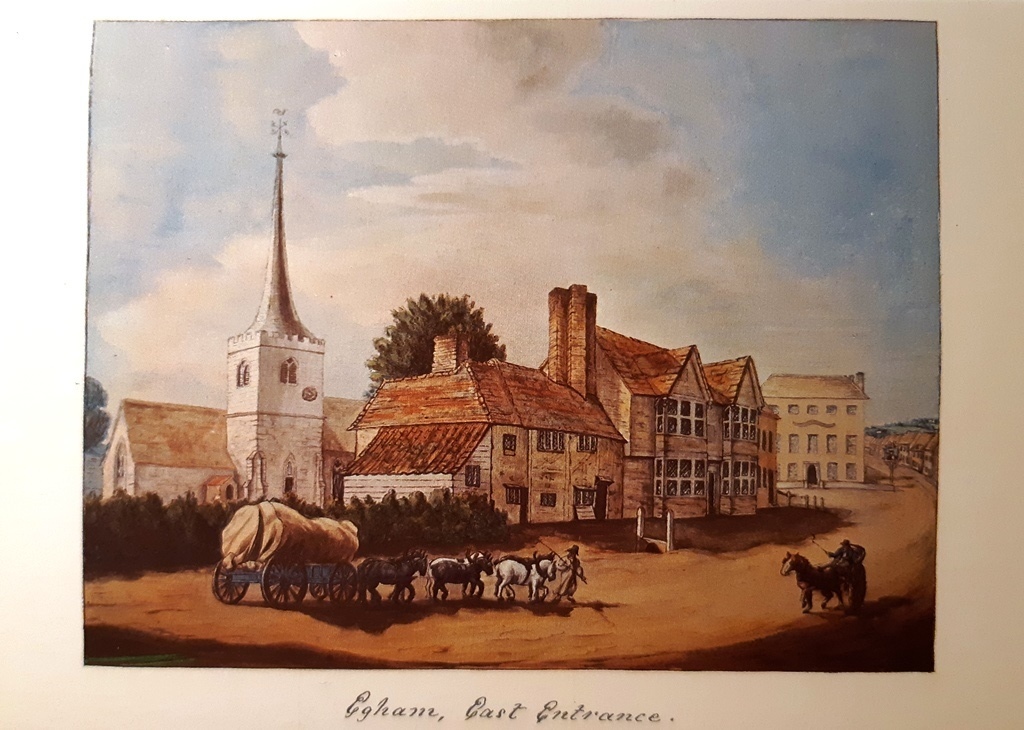 Egham, before 1817. Lapenotiere and Sykes would have come down this hill at around 8pm on the 5th November 1805. Perhaps the streets were bustling with revellers celebrating 200 years since the Gunpowder plot?
The roads from Dorchester through Salisbury and eastwards into London were much better suited for the post-chaises which would have been able to travel at closer to 10 miles per hour on this stretch. However, this was a mild November day, and a thick fog had descended over London and its suburbs. Added to this, the smoke of Bonfire Night might have turned the air into a thick smog making progress difficult.
However the race unravelled over the next twelve hours, one thing is certain. It is Lapenotiere who is shown into the Admiralty Board Room just after 1 am on 6th November. First Secretary of the Admiralty William Marsden himself recorded the arrival of the officer and his words, "Sir, we have gained a great victory, but we have lost Lord Nelson." Sykes arrives just  a few minutes later, but is only shown as far as the lobby, while the First Lord of the Admiralty, Lord Barham, is roused from his sleep and Lapenotiere's place in history is sealed.