At one time, during the early 1800s, there were, rather confusingly, TWO ships named Pickle on the Navy's books. So how did HMS Pickle (the second) come to be part of the action at Trafalgar and afterwards? And what became of her?

The story of HM Schooner Pickle

Once upon a time, there was a small ship named Pickle. She was under the command of Vice-Admiral Hugh Seymour, Commander-in-Chief of the Leeward Islands in the Caribbean, and in fact had no crew of her own, but was an armed tender manned as the need arose by the crew of Seymour's flagship, Sans Pareil. In 1800, this schooner Pickle took part in the capture of numerous French vessels and their cargoes. She was also named in an action reported to the Admiralty in 1801 during which its commander, Lieutenant Greenshield, was killed by Spanish attackers.
However, there's an interesting early twist to this tale. For this was not the same HM Schooner Pickle that took part in Trafalgar and the story of Lapenotiere's journey with the dispatches. It transpires that at one time, during the early 1800s, there were, rather confusingly, TWO ships named Pickle simultaneously registered in the Navy's books. This first, original, Pickle, was retired from the Navy in 1804 when it was no longer considered fit for action, well before Trafalgar.
So how did the confusion come about? How did HMS Pickle (the second) come to be on the scene and then part of the action and aftermath at Trafalgar? And what became of her? 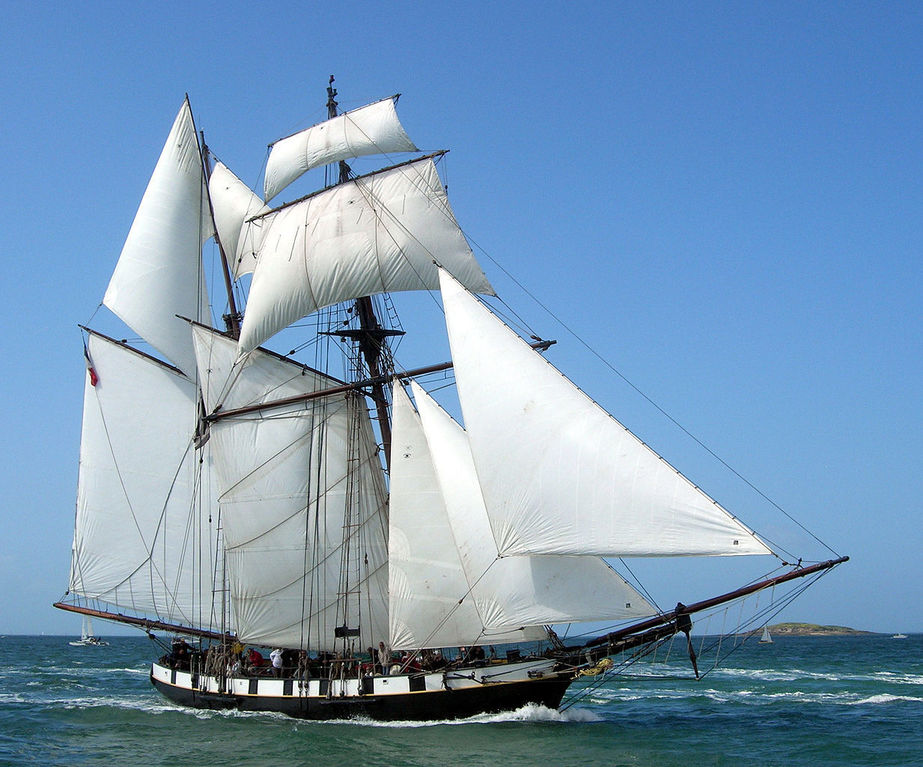 It started with a Sting

In 1800, the same Vice-Admiral Sir Hugh Seymour who had purchased Pickle also acquired a vessel believed to be of Bermudan build, the Sting. Sting was described as 'a clever, fast-sailing schooner of about 125 tons.' Her original name suggests that she may have been American-owned to begin with, and she was almost certainly a merchant vessel. Since the seventeenth century there had been innovative shipbuilding in Bermuda, where the local, sustainably-sourced cedar wood provided light, hardy timber which was naturally resilient to rot and disease.
Seymour needed a replacement for his tender, Pickle, which he had sent as a reinforcement to Curaçao. He began by renting Sting at £10 a day, then wrote to the Admiralty to inform them that he had taken the liberty of purchasing the ship for £2500 to save money over the long term. The Navy Office were irritated that Seymour had committed Navy funds without permission, but nevertheless declared that Sting should be entered onto their books as a 6-gun Tender with a crew of 35 men.
Seymour put the Sting into service and her movements are chronicled in July 1801 setting sail for England but then being forced to return to Jamaica after two other ships in the convoy were driven ashore by a rogue current off the Caicos Islands.

On 11th September 1801 Seymour died at sea after recurrent bouts of yellow fever. The Sting tender was chosen to convey Sir Hugh's body in a lead-lined coffin back to London. She arrived in Portsmouth on 16th October 1801.
There followed some confusion on the part of the Navy Office, who mistook this schooner, Sting, for the Pickle tender about which they had previously heard. It may have been down to their disgruntlement at Seymour's having committed to the two purchases against their prior orders, however for some reason they seem to have refused to acknowledge the existence of the Sting from this point on and they ordered her new commander, Lieutenant Thomas Thrush, rather curtly, "to distinguish her in future by the Name under which she is registered" - which in their view was Pickle. This was in spite of Thrush having known her as Sting from his service under Vice Admiral Seymour - so he must have been rather baffled and perplexed by the decision. And thus it was after this, from January 1802, that this second schooner also started to be known as Pickle. Her official record commences on 19th January 1802 when her newly appointed captain, Thomas Thrush, opened her muster book with the entry, "Began wages and victuals for thirty five men." Hence, between 1801 and 1804, there were two Pickles simultaneously in existence on the Navy's books. It was the second Pickle, originally Sting, who went on to play her part at Trafalgar.

Lapenotiere took command of Pickle in May 1802. His first act on arrival was to order the removal of four of the guns from the deck to the hold, so as to make the boat more stable. He then took her out on a cruise (patrol) for a fortnight, before finally, in July, mooring her in Stonehouse Pool in Plymouth, which thereafter became her base. She underwent several repairs and was well maintained in readiness for service.
The next few years saw Lapenotiere and Pickle engaged on a variety of tasks and errands in the Channel and the Mediterranean, during which Lapenotiere clearly earned a favourable reputation amongst his fellow officers. She also returned to Jamaica carrying despatches cross the Atlantic during this period.

The role of Pickle at Trafalgar is documented from its log maintained by ship's master George Almy and from the logs of other ships at the scene, and also from eye-witness accounts of the battle. Although she did not fire her guns during the battle, she was positioned front and centre for a grandstand view of the goings-on. A midshipman in Euryalus wrote:
'How well I remember the ports of our great ship hauled up, and the guns run out, and as from the sublime to the ridiculous is but a step, the Pickle, schooner, close to our ship with her boarding nets up, her tompions out and her four guns about as large and formidable as two pairs of Wellington boots, "their soul alive and eager from the fray," as imposing as Gulliver waiving his hanger before the King and Queen of Brobdingnag.'
We certainly get the impression of a small but feisty vessel standing by eagerly to be of service in whatever measure it could.
After Lapenotiere
After his promotion to commander following Trafalgar, Lapenotiere was succeeded as captain of the Pickle by Lieutenant Daniel Callaway. Under Callaway, and with George Almy still the acting Master of the vessel, Pickle was involved in the capture of a French privateer, the Favorite. This was the last piece of action she was to see. Callaway left the ship in 1807.
Her next commander was Lieutenant Moses Cannadey, and around this time the crew changed in composition to include a number of pressed men including several 'landsmen' with no experience. Desertion was commonplace according to the Pickle's records, as she could be a most uncomfortable home for her small crew, and in spite of the presence of seasoned officers and senior crew, the muster records of the time paint a picture of a somewhat discontented ship. In July 1808, Pickle was on course once again to Cadiz. She passed Cape St Vincent on 26th July and pressed on, speeding through the night. For some reason, she was travelling faster than anticipated, leading to an error in navigational judgement. The prevailing westerly wind ran her aground on the Chipiona Shoal at the mouth of the Guadalquivir River which leads up to Seville. All the crew were saved, but her dispatches were lost, only to be recovered three days later by a diver. A court martial was carried out to hold the ship's officers to account but the verdict arrived at was that it was an 'unaccountable error in the reckoning'. Nothing more than a reprimand was given for the crew's alleged part in Pickle's demise.
Interestingly, in a later letter from Collingwood, we learn that there was a woman on board at the time of the shipwreck, allegedly in the company of Lt Cannadey. Collingwood was not in the least impressed by this development which he clearly interpreted as having been a contributing factor to the officers' good judgement and the loss of the schooner. Cannadey was sent home, never to be promoted, and he died still a lieutenant in 1829.
You can read a more detailed history of the Pickle in Peter Hore's book, "HMS Pickle, the Swiftest Ship in Nelson's Trafalgar Fleet". 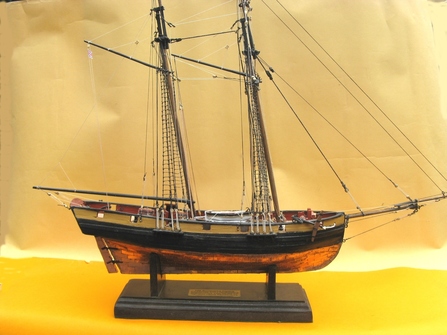 A scale model of Pickle
A scale replica of Pickle, hand made from scratch by Chris Thomas.

What is a schooner?

At the turn of the 19th Century, a schooner was defined (in brief) as "a small vessel with two masts and a bowsprit. The masts rake aft, but the bowsprit lies nearly horizontal."
The arrangement of the schooner's sails means that these vessels are able to sail very close to the wind (almost directly into it) and are very light and responsive.
The documented draft (depth of hull below water level) of HM Schooner Pickle was just 2.3 m at the front (fore) and 3.5 m at the back (aft). The height of the ceiling in the hold was 2.8 m and her maximum breadth 6m, so she was not a large vessel.
As a consequence of their small size, shallow draft and manoeuvrability, schooners were often used as conveyances and messenger ships rather than battle ships. The larger square-rigged ships had some resilience to battle damage, whereas in a schooner, the loss of a single boom would leave the vessel unmanageable.

Did you know there is a lookalike re-creation of HMS Pickle in use today?

Where can I find out more?