We remember the events of 2005 when The Trafalgar Way was inaugurated with the re-enactment of Lapenotiere's journey and the delivery of The New Trafalgar Dispatch over six weeks of summer celebration from Cornwall to London.

The bicentenary of Trafalgar was commemorated throughout 2005 with over 800 events, small and large co-ordinated by the Official Nelson Commemorations Committee and SeaBritain 2005, a year-long celebration of Britain's relationship with the sea designed to link the nation's past with the present with an eye to the future. The aim was to promote a wider understanding, especially among young people, of Britain's maritime heritage and in particular of Nelson and the Royal Navy of his time. The 1805 Club masterminded and organised two of the largest events, The Emirates Thames Nelson Flotilla on 16 September and The New Trafalgar Dispatch during August and September 2005.

2005 : Andover celebration
Actor Alex Price playing the part of Lt Lapenotiere travelled the length of The Trafalgar Way with his New Trafalgar Despatch. Here he is pictured being greeted by the Mayor of Test Valley, Councillor Peter J Boulton, in Andover.
Enormous courage was shown on both sides during the Battle of Trafalgar. Britain, France and Spain all have heroes to honour and famous deeds to celebrate. Two hundred years later, The New Trafalgar Dispatch celebrated international friendship between former opponents and paid homage to all heroes. It also celebrated the humanity after victory that was a clear reflection of the fellowship of the sea, as powerful a force today as it was in 1805.
The New Trafalgar Dispatch started its journey at the battle site and followed the sailing and land route taken by Lieutenant Lapenotiere RN carrying Vice Admiral Collingwood's original Trafalgar Dispatch. It landed from the JST Lord Nelson at Falmouth, where it was received by HRH The Princess Royal and welcomed by vast crowds. Lapenotiere's 271-mile land journey was then ceremonially interpreted using a replica post-chaise. This created The Trafalgar Way which was permanently marked with twenty-one plaques where Lapenotiere paused to change horses.

Communities from Falmouth to London join in the celebrations

An enormous amount of research and planning went into the inauguration of The Trafalgar Way. Plaques were commissioned and ceremonial events organised, including the famous re-enactment of the arrival of the yellow post-chaise into the towns and villages where Lapenotiere would have changed horses and carriages in 1805. It's quite an exhausting odyssey! Actor Alex Price took on the role of interpreting Lt Lapenotiere for the duration of the re-enactments and the replica post-chaise was thoroughly researched and built to order.
Were you there? Did you play a part in the ceremonies? Do you have any photos you could share? We would love to hear from you if so. As a memory-jogger, here is the timetable of the unveiling events which took place in August and September 2005. We also have a collection of people's stories and experiences of those special events. 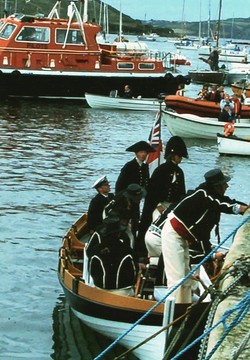 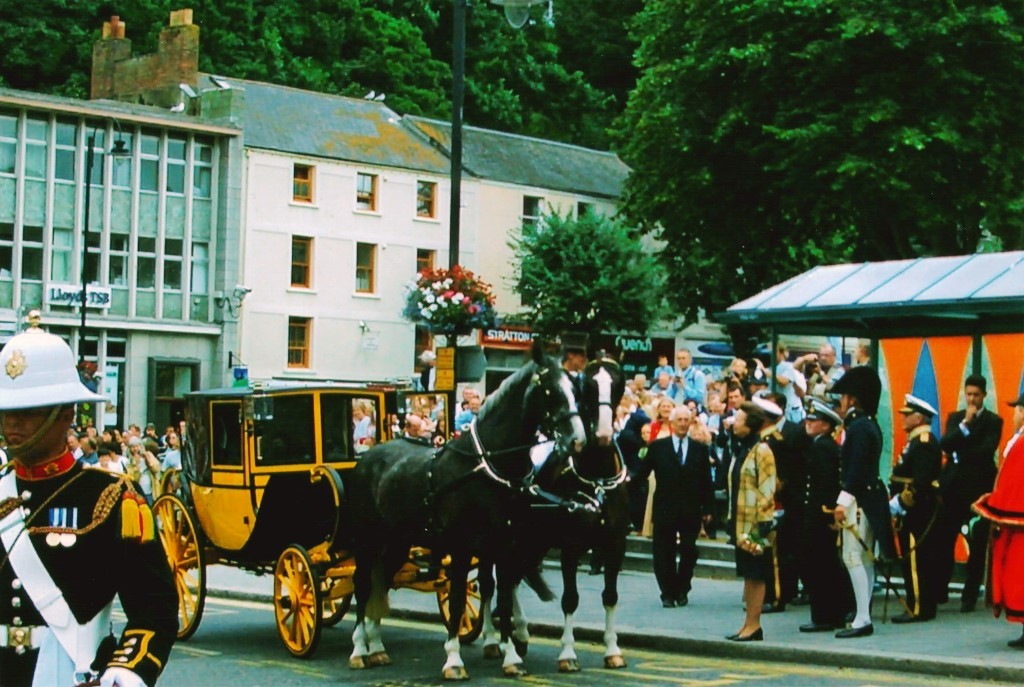 Then she greets the post-chaise outside the Art Gallery where the first plaque is unveiled, before "Lt Lapenotiere" actor Alex Price embarks on his six-week mission to recreate the 37-hour journey of 1805. The post-chaise was commissioned and built specially for the commemorations by Richard James, and supplied and driven by Stephen and Liz Jarman of Carriage Hire Ltd.
Penryn, 5pm, Lt Lapenotiere arrives in his post-chaise and presents a copy of the Dispatch to the Mayor, Councillor Gill Grant.
Fraddon, Friday August 5th - the plaque is unveiled at The Blue Anchor at 6pm and a commemorative party is hosted by the St Austell Brewery with their Admiral's Ale. The chairman of Restormel District Council, Councillor Marilyn Wellman, receives the New Trafalgar Dispatch.
Truro, Saturday August 6th - Lt Lapenotiere returns to Truro at noon to present the Dispatch to Lady Mary Holbarow the Lord Lieutenant of Cornwall and Mayor Stuart Roden. The celebrations are augmented by the Rum and Shrub Sea Shanty Singers
Bodmin and Launceston, August 7th - in Bodmin, a copy of the Dispatch is presented to Mayor Councillor Lance Kennedy to the accompaniment of the Lostwithiel Town Band. Later that afternoon the post-chaise arrives in Launceston where Lapenotiere is greeted by Mayor Councillor Gerald Smith.
Lifton, Devon, August 15th - the Lord Lieutenant of Devon, Eric Dancer, presides over ceremonies at the Arundell Arms, site of the next plaque unveiling. In the afternoon, copies of 'landlords' dispatches' are delivered to the keepers of other local inns including the Blue Lion at Lewdown and the White Hart at Bridestowe.
Okehampton, August 16th - church bells, the town crier, music and period costume herald the arrival of the post-chaise. Here, the Vice Lord Lieutenant of Cornwall, the Earl of Devon, together with the Mayor, Councillor Tony Leech, are presented with the official New Trafalgar Dispatch scrolls.
Sticklepath, 6pm - A plaque is unveiled opposite the Devonshire Inn, and landlords' dispatches are presented to them and to the Taw River Inn, and then onwards, to innkeepers in South Zeal, Whiddon Down and Crockernwell, Cheriton Bishop, Tedburn St Mary and Nadderwater.
Exeter, August 17th - the Exeter Pipe Band marches down the High Street ahead of the arrival of Lapenotiere. Passengers arriving by Stagecoach here include local descendents of Admiral Nelson, Admiral Collingwood and the Spanish Admiral Gravina. The Lord Lieutenant of Devon and civic leaders travel on to Great Moor House to present the county archives with a copy of the New Trafalgar dispatch for safekeeping.
Honiton, August 18th - presentations are made in Clyst Honiton, Fairmile, the Escot Estate, Fenny Bridges and Buckerell. The High Sheriff of Devon arrives in a horse-drawn taxi and the New Trafalgar Dispatch is presented to Mayor Sally Casson. Devon cream teas are served, a balloon race is held and a painting competition is judged. Did you take part in any of these activities?
Axminster, Friday August 19th - plaques are unveiled at Wilmington, Kilmington and Axminster. Here, the Mayor, Sue Spiller is the recipient of the Dispatch, and the ceremony is accompanied by handbell ringers and medieval dancers.
Lyme Regis, August 20th - Lt Lapenotiere presents a copy of the New Trafalgar Dispatch to Mayor Barbara Austin and is greeted by the Honourable Mrs Charlotte Townshend, High Sheriff of Dorset. He visits the famous Cob before reboarding the post-chaise.
Bridport and Burton Bradstock, Sunday August 21st - the New Trafalgar Dispatch is welcomed to Bridport by Deputy Lieutenant of Dorset, John Colfox and the Mayor, Councillor Sandra Brown. The St Swithin's Band are on parade. Lapenotiere then heads to Burton Bradstock, home of Midshipman Richard Roberts who served on HMS Victory at Trafalgar, to meet Rear Admiral Gwyn Pritchard and the chairman of the Parish Council, Captain Michael Southgate.
Portesham and Portland, August 22nd - although not on the route taken by Lapenotiere in 1805, the commemorations in 2005 included a tribute to Captain Thomas Masterman Hardy of HMS Victory at Hardy's monument near Portesham. In the afternoon, Lapenotiere visits the historic naval port of Portland.
Weymouth, August 23rd - another ceremonial presentation is held on the Esplanade, accompanied by the Weymouth Concert Brass Band.
Dorchester, August 24th - here, Lapenotiere is met by the Lord Lieutenant of Dorset, Captain Michael Fulford-Dobson, the Mayor of Dorchester Councillor Richard Biggs and the chairman of Dorset County Council, John Peake. The Durnovaria Silver Band perform.
Blandford and Woodyates, August 25th - a plaque is unveiled while Shaftesbury Town Silver Band are on parade outside the Crown Hotel. The tour diverts to Blandford Camp and Pimperne for special commemorative ceremonies. Then it continues to Woodyates where the dispatch is presented to the chairman of Sixpenny Handley and Pentridge Parish Council, Councillor Pauline Bailey-Wright.
Coombe Bisset, August 27th - at around midday, Lt Lapenotiere arrives in the post-chaise and is taken on a walking tour of the village by the Chairman of the Parish Council.
Salisbury, Sunday August 28th - the festivities at the Guildhall are accompanied by the Amesbury band, a Hornpipe Team, Royal Marine buglers and drummers and Sea Cadets from Swindon and Salisbury Units are on hand to marshal proceedings. The Lord Lieutenant of Wiltshire (John Barnard Bush) and the Mayor of Salisbury are presented with copies of the New Trafalgar Dispatch and the plaque (now installed on Fish Row) is unveiled.
The Vyne, Andover, August 31st. The New Trafalgar Dispatch is presented to the Vice-Lord Lieutenant of Hampshire, Commander Sir Miles Rivett-Carnac, before taking for safekeeping to the NMRN in Portsmouth.
Andover, Thursday September 1st - at 6pm, a re-enactment of Lapenotiere's arrival takes place in front of the Guildhall. The event is accompanied by the Historical Reenactment Group, the Broughton Sword Dancers and with music by the Romsey Sea Cadet Band.
Basingstoke, September 2nd - The yellow post-chaise travels up Sarum Hill and into the Top of the Town. Mayor of Basingstoke and Deane, Councillor Mrs Paula Baker is presented with a copy of the New Trafalgar Dispatch in front of the Willis Museum at 2.30pm.

Bagshot, September 3rd - The post-chaise arrived to a crowded Bagshot Square to be met by Morris dancers and the Bagshot Band. Read more about the occasion in this Bagshot Village article.

Bagshot Park, September 3rd - The post-chaise arrives at a reception and concert of maritime music hosted by the Earl and Countess of Wessex.

Staines, September 4th - The post chaise and Lapenotiere arrive on Staines Bridge where they are greeted by the Mayors of Runnymede and Spelthorne. The group continue to the site of the plaque unveiling at the Old Town Hall in Staines.
Hounslow, September 6th - a presentation to the Mayor takes place in Hounslow High Street, followed by a visit to Osterley Park where a copy of the Dispatch is presented to the Vice Lord Lieutenant for Greater London.
Hammersmith, September 7th - the plaque is unveiled at the Town Hall in King Street and the New Trafalgar Dispatch presented to the Mayor of Hammersmith and Fulham.
Kensington, September 8th - at 2pm at Holland Park another copy of the New Trafalgar Dispatch is presented to the Mayor of Kensington & Chelsea and the plaque unveiled.
Westminster and The Admiralty, Friday September 9th - The event starts at Knightsbridge barracks, from where the post-chaise, escorted by the Household Cavalry, proceeds via Hyde Park to the Wellington Arch. At 11.20 am a presentation is made to the Lord Mayor of Westminster. The post-chaise and escort then continue down Constitution Hill, along The Mall and arrives at Horse Guards Parade at 11.55 am. The Royal Marine Band joins the procession through Horse Guards, onto Whitehall and into the Old Admiralty courtyard. Here, the New Trafalgar Dispatch is presented to the First Sea Lord. 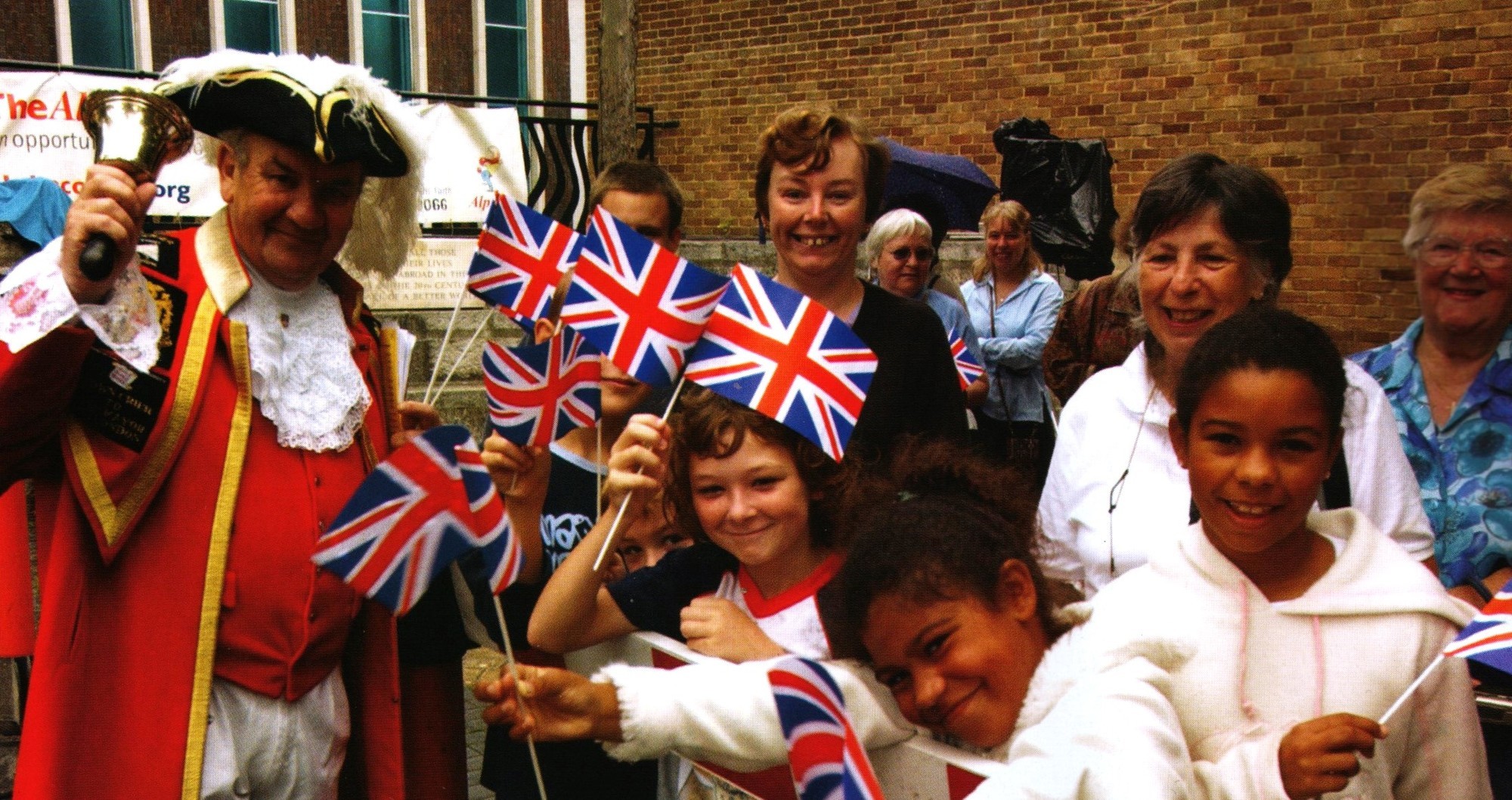 The Town Crier and families gather in Hounslow
All along the route, families and schoolchildren gathered to celebrate the arrival of Lt Lapenotiere with his New Trafalgar Dispatch.
Photo from The Hounslow Magazine, September 2005

We're gathering people's memories and souvenirs of the events of summer 2005.
See our collection so far!
We'd love to hear your recollections from The New Trafalgar Dispatch celebrations in 2005
Tell us your story