The eighteenth stage of Lapenotiere's journey by post-chaise.

<<Back to Overton| Onward to Bagshot >>

You can learn all about Basingstoke’s rich history in the Willis Museum in Market Place where you will also find a plaque commemorating Lieutenant Lapenotiere’s visit to the town in 1805 when he was racing towards London with the Trafalgar Despatch. History is also brought to life at Milestone Museum of Living History located in the Leisure Park. Here a network of streets have been recreated according to those found in Victorian and 1930’s Hampshire.

The origins of the town go back into the mists of time with artefacts dating from the Paleolithic period being found in the region. Longbarrows and Iron Age Rings nearby are also testament to ancient human activity. Two significant ancient battles were fought here: Fighting together Aethelred of Wessex and Alfred the Great achieved a victory over the Danes in 871. Later in 904 a savage battle was fought here between Edward the Elder and his cousin Aethelwald.

The town has held a regular Wednesday market since 1214. Like many old towns it has a history of devastating fires with two particularly severe ones in 1601 and 1656. The cloth industry, malting and brewing were once important industries in the town.

Thomas Burberry opened his first shop here in 1856 and he became famous after inventing Gabardine.

Conflict between the Salvation Army and locals, particularly those in the brewing trade, became so violent on Sunday the 27th March 1881 that troops were called upon to break up the conflict and the mayor read the Riot Act.

This old market town was significantly expanded after the Second World War. Nowadays the town is sometimes nicknamed “Roundabout City” because of the large number of roundabouts! 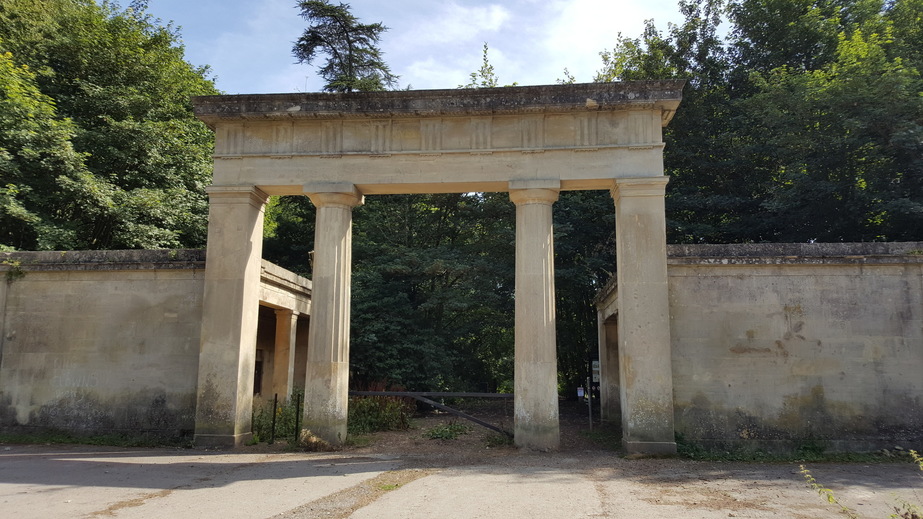 The Bolton Arch at the entrance to the Crabtree Plantation, Old Basing.

Lieutenant Lapenotiere would have headed out of Basingstoke on the London Road - now the A30 via the Hatch public house in Old Basing. Nearby are the ruins of Basing House, which was once the largest private house in Tudor England. It was destroyed by Cromwell’s forces in the English Civil War.

Next on Lapenotiere’s route would have been Hook which would have been a small village at that time, but is now a thriving business district. In fact the first spurt of development here was due to it being on the stagecoach route from London to Exeter, with the turnpike road being built in the late 18th century to aid the navigation of the steep Scures Hill to the west of the village.

Hook has several annual events including the Hook Fun Run & Road Race which attracts over 1200 runners on the third Sunday in May. There is the Hook Flower and Produce Show in September, the Hook Summer Fair and the Hook Beer Festival.  Any of these could make an excellent subject for a “Postcard from the Trafalgar Way.”

Shortly after this, heading east, the A30 turns north towards Hartley Wintney with its beautiful wide Hampshire main street. Known for its many antique shops the green boasts a pond with a thatched duck house. Beyond the green are the Mildmay Oak trees which were planted at the behest of Lady St John Mildmay in response to a call in 1807 by Admiral Collingwood after the Battle of Trafalgar for landowners to plant oaks to provide timber for naval ships. The nearby cricket green is the home to the oldest cricket club in Hampshire..

West Green House is a fine 18th Century country house owned by the National Trust while Victoria Hall, at the west end of the village, was opened in 1898 to celebrate the golden jubilee of Queen Victoria.

From here The Trafalgar Way continues north east on the A30 London Road to Hartfordbridge. 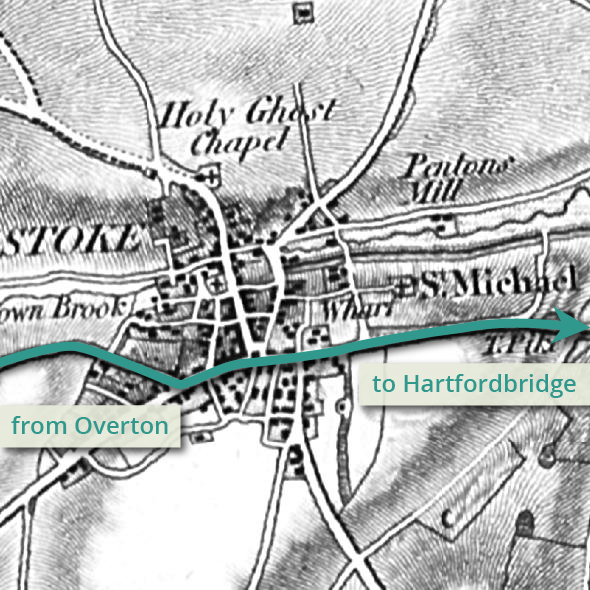 The route through Basingstoke