Galdós' 1873 novel retelling the story of the Battle of Trafalgar through Spanish eyes is a refreshing treat. 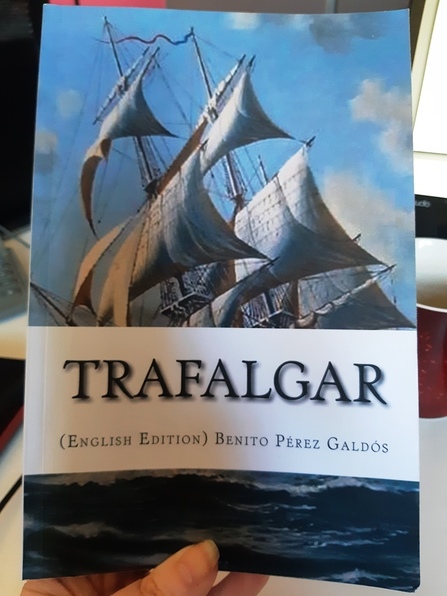 "... before long the inhabitants of the different islands will be convinced that they are committing a great folly in making such tremendous wars, and a day will come when they will embrace each other and all agree to be like one family."

So states the inscription on the simple memorial at Cape Trafalgar in Spain. My attention having been drawn to the name of Benito Pérez Galdós, I decided to check out his novel, Trafalgar, from which the quotation is taken, and hunted for a recent English translation. I found this one by Clara Bell. It's available from Amazon and is only 97 pages long.

I learned that Galdós wrote Trafalgar as the first in a series of 46 historic 'episodes', a set of novels via which he charts Spanish history from 1805 to 1880. Galdós himself was born in the Canary Islands in 1843 and wrote his Episodios Nacionales between 1873 (Trafalgar) and 1912 (Cánovas). He had moved to Madrid as a young man to study, and became intrigued by human nature and society at all levels. He was a successful journalist, but turned to writing fiction as a means to better promote his politically liberal vision of a new Spain.

As with many translations, you sometimes lose a little of the literary brilliance of the original, but it is clear to see why Galdós has been compared with Dickens and Balzac. His style is humorous, well-observed and very readable. He deploys a great blend of character, emotion, caricature, philosophy and historic fact to tell a well-known tale in a most enjoyable way. One of my reasons for wanting to read the novel was to see how the Spanish view Trafalgar. The muted commemoration at the cape and again in Cádiz had really struck me—of course, it's a cause for sorrow and reflection for the Spaniards, nothing more. Or is it? Do they feel anger at the British? At Bonaparte? I also wanted to find out what they thought of Nelson, and of their own leaders, Gravina, Churruca, Alava, Alcalá Galiano etc. What was it like being forced into an alliance with the French? How was their navy viewed, and what was the Spanish rationale for the defeat?

Trafalgar has been criticised in reviews for its naïve handling of the battle scenes. In my view they are described rather well. The whole narrative is written from the first person perspective of a young man, Gabriel, who is taken into service by an elderly ship's captain, Don Alonso Gutierrez de Cisniega and his wife. Don Alonso and his good friend and colleague Marcial, a seasoned navy veteran and expert story-teller, decide to head to Cádiz in October 1805 to lend their experience in the inevitable clash with Nelson, whose reputation is stellar, and they take Gabriel with them. Since Gabriel himself is a novice, drinking in everything around him, the account of the action is remarkably convincing without being overly technical. Galdós, of course, is writing with the benefit of historic hindsight and his accuracy and the level of detail with which he charts the fate of each vessel and its captain is admirable. Snippets of news and rumour are relayed by survivors and prisoners as they are transferred from ship to ship. It is clear that the author did considerable research, but has managed to keep the narrative approachable, not stodgy and over-complicated. 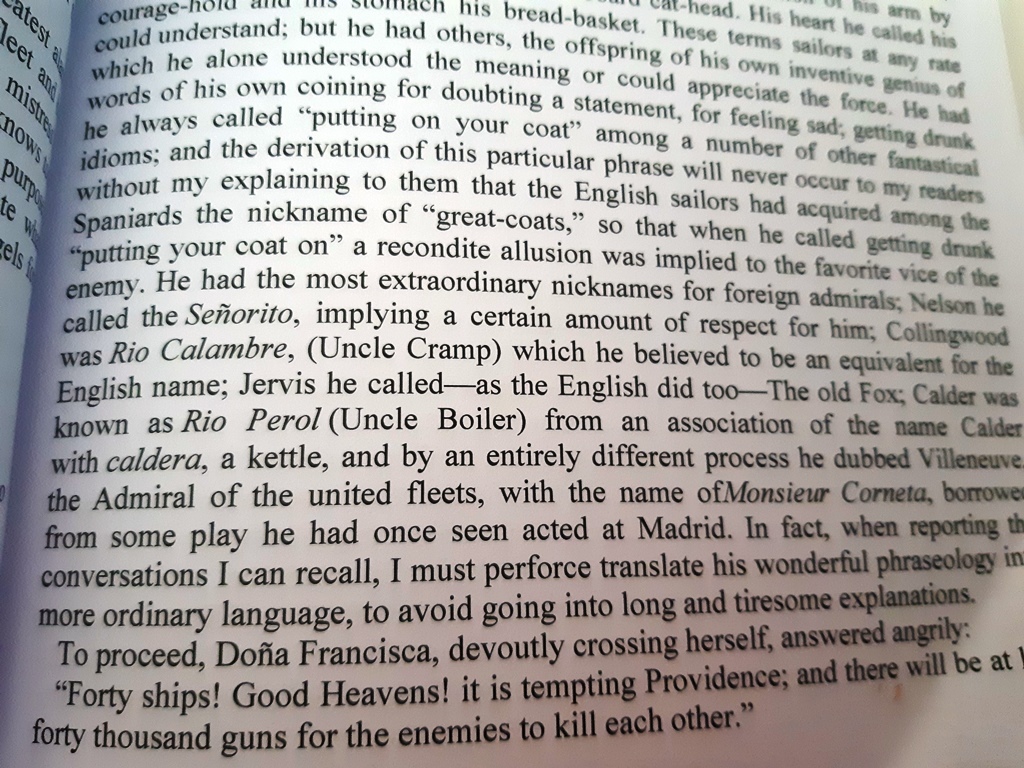 There are many passages and descriptions which made me smile: Don Alonso's nicknames for the main players in the naval actions of the time; the vanity of the Spanish officers in having their hair dressed prior to sailing. Galdós uses this last observation to have a little dig at his contemporaries: "I saw the valets busied in powdering the heads of the heroes they waited upon, I could not help asking myself whether this was not, of all occupations, the least appropriate in a man-of-war, when every minute was precious and where everything that was not directly serviceable to the working of the ship was a hindrance. However, fashion was as tyrannical then as now, and even at such a moment as this enforced her absurd and inconvenient rules with inexorable rigor." I wonder if British officers displayed the same vanity?

During the battle, Gabriel and his masters are on board Santísima Trinidad, the largest vessel at Trafalgar, a four-deck behemoth with 140 guns. Gabriel's wide-eyed description of the huge interior of the vessel with its maze of decks, cabins and passages is a treat to visualise. Similarly, his relation of the preparation of the ship for battle: a great quantity of sand is brought up from below decks and strewn over the upper deck, poop and forecastle, between decks too. When he asks another boy the purpose of the sand the answer is coolly delivered: "For the blood". Credit must be given to the translator Clara Bell for accuracy with the historical naval vocabulary and convincing turns of phrase.

I was interested, also, in the even-handed way the British are portrayed. As the aftermath of the battle develops, Gabriel comes to appreciate the similarities between the British captains and crew and those of the combined fleet—hence the phrase quoted at the start of this article, which is just one of the boy's philosophical reflections at sea in the days following defeat and capture. Of the French, and particularly Admiral Villeneuve's decision to turn the fleet and head back to Cádiz, Galdós allows his characters to voice scathing opinion. It is this action that is blamed several times for the subsequent defeat and capitulation of the combined fleet. At first, the French and Spanish ships are sailing south, organised into four lines: a vanguard of six under Alava, the centre of six commanded by Villeneuve and a rear of six commanded by Dumanoir, plus a reserve of 12 vessels under Gravina. When Admiral Villeneuve sights the British lines hoving down from the windward and aiming to cut though the centre and rear of the combined lines, he signals the decision to 'put about' so as to try to get windward of Cádiz harbour and be able to reach safety again. This has the effect of putting the ordered sections into disarray, with little wind to power their progress north and enable them to reform the line. "The line of battle is all broken up; it was bad before and is worse now," states Marcial, glumly. Added to which, on the eve of battle, unlike Nelson's well-rehearsed and articulated plan, Villeneuve had reputedly given the captains free rein in battle. "What can you think of an admiral, who, the day before a battle, sends for his captains and tells each of them to do what he thinks will win the day." As hindsight tells us, the size of the combined fleet and the magnificent vessels within it, the pride, gumption and bravado of the Spanish and French crews are NOT enough to save the day.

It's a well known adage that history is written by the victors. I might have arrived at this novel expecting some attempt at historical revisionism, but I didn't find it - far from! It was interesting to experience the familiar story of the battle sympathetically and humbly retold by the defeated party, and a very constructive and insightful exercise it was, too. I now feel the need to read more of Galdós' Episodios to determine in what other ways the history and character of the Spanish nation developed during the 19th century.