By:
Christopher Seaton and Trevor Waddington
Exeter Flotilla has been organising a special Trafalgar Day Service at the Cathedral for years. Here's how it came about. 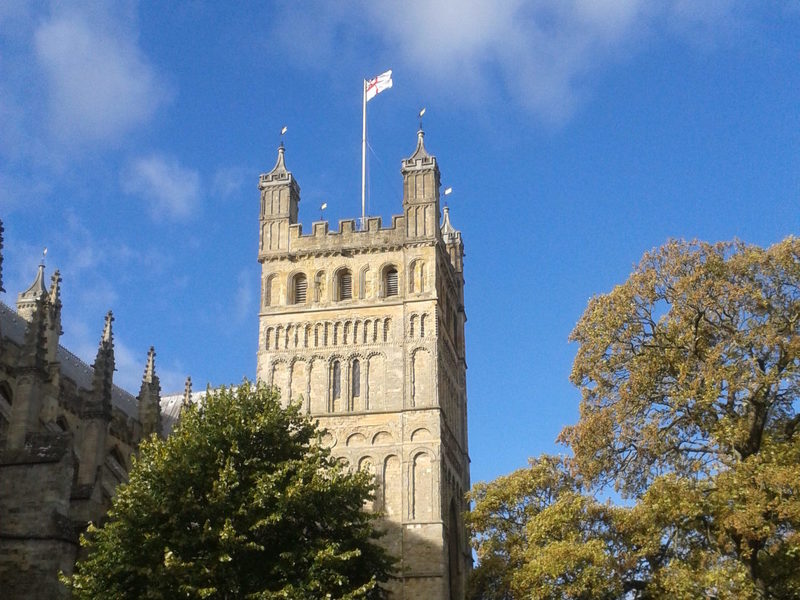 In the late sixties and early seventies, a member of the Exeter Flotilla, Lieutenant Commander Adrian Martin MBE RD RNR wondered why Exeter, the capital of the seafaring County of Devon, did not celebrate the Battle of Trafalgar, especially when Lord Nelson had been made a Freeman of the City in 1801.

In 1972, Adrian decided to set this right. He first considered holding the Service in one of the City’s churches but eventually decided that as the congregation should be from across the County, it should be more appropriately held in the Cathedral. Initially the Dean and Chapter turned down Adrian’s request to hold a Trafalgar Day Service, but after gaining the support of the Archdeacon of Exeter, the Archdeacon of Totnes (a former Royal Naval Chaplain) and John Armstrong, the Assistant Bishop of Exeter (and a former Chaplain of the Fleet), the Dean and Chapter agreed that a Trafalgar Day Service could be held in the Cathedral in 1973.

Adrian then spent the next few months publicising the Service, writing to seventeen Devon newspapers (all of which published his letter), HMS Exeter, Shore Establishments in the West Country, as well as Sea Scouts, Sea Rangers, Wrens Association, the British Seaman’s Boys Home at Brixham, Devon Life, Navy News and local Television and Radio. He arranged for display of naval ship models lent by the RN Careers Office in an Exeter Building Society window.

In the early years, the Commander in Chief, Naval Home Command printed the Order of Service. Today this is done by the Cathedral staff with the cost being borne from the Collection. The Ministry of Defence (DNR) produced posters which could be distributed to Hotels, Libraries, Post Offices, and Tourist Offices etc but sadly cost cutting by the MOD stopped production of posters after the 2005 Service.

He then arranged for the Band of the British Seaman Boys Home to lead a parade of Sea Scouts, Sea Rangers and Girls Nautical Training Corps through the streets of Exeter and for the Royal Marine Band from the Commando Training Centre at Lympstone to play on the Cathedral Green prior to the Service. The Commandant General has always been very supportive of the Service and most years the Service has been enhanced by the music of one of the Bands. The exception to this was in the 1990’s when the Category 1 status of the engagement (which means there is no cost to either the Flotilla or Cathedral), was temporally withdrawn and the Band of the Devon and Dorset’s played instead and at the turn of the century when the RM Bands were all involved in their war role of stretcher bearers and the Devon and Cornwall Constabulary Band stood in.

The Lord Mayor of Exeter and the Flag Officer Plymouth accepted an invitation to attend the Service. It was agreed that serving officers would wear No 1 uniform but without swords or medals in order to differentiate from the Remembrance Day Service which would take place in the Cathedral a few weeks later. The Sermon was given by the Archdeacon of Totnes with over a thousand people attending the Service followed by a Reception and Lunch for the more important guests in the Royal Clarence Hotel. After the Service Adrian received a letter from the Dean saying what a wonderful occasion it had been and giving a date for the 1974 Service!

Sure enough, the event continued into future years, right up to the present day. It saw a few developments over the years and both the numbers attending and the collections raised grew and grew...


A member of the Ship’s Company

A few days after the first service, Adrian received a call from a former Chief Petty Officer, Charles Cutler, saying he had served in HMS Victory. Thinking he was referring to the Barracks in Portsmouth, Adrian thought nothing of it until Mr Cutler added he was serving in Victory when she was still afloat in 1903! Mr Cutler lived in Exmouth and at the 1974 Service and in subsequent years, until he was almost a hundred, read with great feeling, the Nelson prayer.

In the lead up to the 1974 Service, Adrian hoisted Nelson’s famous signal (in the authentic Popham’s Code) on the three flagpoles on top of Exeter Guildhall. This was reported in the Daily Telegraph.

The 1974 Service was attended for the first time by the Lord Lieutenant and Vice Lord Lieutenant with the Sermon being given by the Chaplain of the Fleet. Adrian arranged for the first of many fly pasts by a Swordfish from the Royal Naval Air Station at Yeovilton as the congregation were leaving the Cathedral. In 2009, the centenary year of the Fleet Air Arm, there was to be a Fly Past by a Sea Hawk from the RNHF but sadly this had to be cancelled due to it being out of service.

After the 1974 Service, Adrian “borrowed” the Great Hall in the Deanery to hold a Reception for about 60 VIPs. Half a dozen volunteers from the Flotilla helped host the Reception and pay for the refreshments. Also from 1974, Adrian persuaded various people (mainly Exeter Flotilla members) with stately homes to host a lunch for around 35 VIPs. The main hosts were Admiral Sir William and Lady Powlett at Cadhay, Captain and Mrs Weir at Meldon View, Chagford and Adrian and his wife at Exeter.

In more recent years, the Flotilla has held a Reception in the Chapter House and Lunch for official Flotilla guests in the Refectory. In each case Flotilla members attending have paid their way in order to keep costs down unless attending as “official guests”. In 2005, the Bicentenary Anniversary of the Battle, a much larger Lunch was held in the Guildhall.

Most of the Preachers and all of the Readers have a Naval or Maritime connection. The Dean and Chapter were a little uneasy at having a layman preach in 1975 but were full of praise for Admiral Sir Horace Law after the Service. The Bishop of Norwich preached in 1977; he had been an RNR Chaplain. Bishop Fleming in 1979 had been a Naval Chaplain and polar explorer. Bishop Wakeling who preached in 1984 had fought with the Royal Marines during World War II, being ordained after the War and the first Royal Marine Officer to become a Bishop. The Right Reverend Ellison, the Preacher in 1986, was a RNVR Chaplain during World War II. The following year the Sermon was given by another World War II RNVR Chaplain, the Right Reverend Hook who won an MC serving with the Royal Marines. He became Chief of Staff to the Archbishop of Canterbury. In 1988 The Right Reverend Noel Jones, Bishop of Sodor and Man became the first, and to-date, only person to preach three times at a Trafalgar Day Service, the first occasion in 1985 when he was Chaplain of the Fleet.

In 1979, the Service was attended by HRH the Duke of York, then a serving Midshipman. There was to be no advanced publicity and only Adrian Martin knew HRH would be attending and it was left to him to inform the Police and Cathedral staff a few days before the Service. The Press were not informed which did not go down well with the third estate! 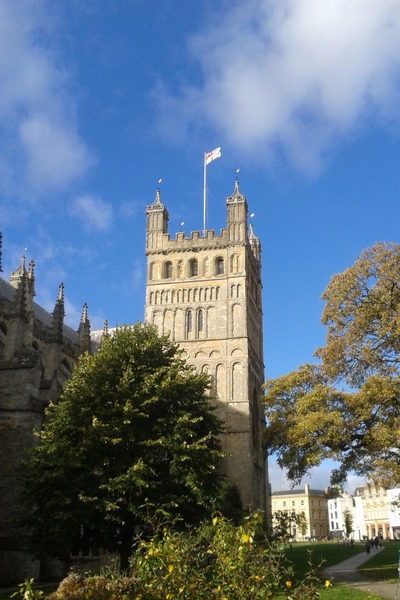 The Naval Secretary has given permission for the White Ensign to be flown above the Cathedral and currently the Ensign used is lent by Captain Fawcett. It is an Ensign from HMS Bulwark in which he served as Commander in 1966 and 1967. Captain Fawcett presented the Ensign to the Flotilla in July 2008. Unfortunately this Ensign was damaged beyond repair by gales in 2010 and since then the Ensign flown by HMS Exeter at her decommissioning has been flown.


In 2007, the Royal Naval Guild of Bellringers were programmed to ring the Cathedral’s Bells but sadly, due to repairs running over time, this did not happen. After the decommission of HMS Exeter and her Bell, being entrusted to the Cathedral, the Service has commenced with the striking of Seven Bells on that Bell.


After the Cathedral expenses have been paid, the Collection is split between the Cathedral and a maritime charity, most generally the Missions to Seafarers and The KGV Fund for Sailors. In 2007, £372.70 was donated to the Falklands Veterans Foundation.

HMS Exeter and the Falklands Campaign


The 2007 Service coincided with the 25th anniversary of the Falklands Conflict and this was reflected in the Order of Service. HMS Exeter had played a significant role in the campaign and it was planned that prior to the Service, the Ship’s Company would exercise their Right of Freedom of the City by marching through the City centre to the Cathedral and then attend the Service. Sadly the ship was re-deployed a couple of weeks prior to the Service and the March had to be postponed. However the 2008 Service, the Ship’s Company did exercise their Right of Freedom with the Commander-in-Chief Fleet and Lord Lieutenant taking the Salute before joining in the Service. There were some 900 people in the Cathedral that year which may well be a record.

Lessons were read by Commodore Coulson and Commander Patterson. Commander Trevor Waddington read Lord Nelson’s Prayer on the eve of the Battle of Trafalgar. The sermon was given by The Rt Revd Tim Thornton, Bishop to the Forces. Music for the service was chosen by the Precentor, Canon James Mustard.

As it was Trafalgar Day all Royal Marine Bands were engaged elsewhere but fortunately the Flotilla had the services of the BRNC RN Volunteer Band Dartmouth. The Trafalgar Service collection raised £381.33 for the RN&RM Charity. The Trafalgar Roll was on display showing the names of the 1,115 men of Devon who fought with Admiral Nelson at the Battle of Trafalgar.


The service this year will take place on 20th October 2019 at 11.30am. Attendance open to all, but some seats are reserved for the Exeter Flotilla and their guests, by invitation only. If you would like to reserve one, or for more information please contact Cdr Trevor Waddington (01395 443978).