How many ways can you pen "Lapenotiere"?

By:
John Richards Lapenotiere's name was the source of much confusion for 18th- and 19th-century scribes. 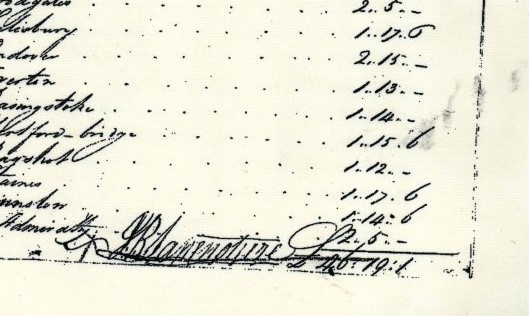 It's not the easiest of names to say. Nor was it the easiest to write, according to documents and records sourced by author Peter Hore in his research for his books about Nelson, Trafalgar and the events that followed.

The name is French, and Lapenotiere's family were of Huguenot extraction, arriving in Britain after the accession of William of Orange in the late 17th century. His great, great-grandfather Frederick De La Penotiere was the son of a French nobleman. Contemporary documents such as the receipt for his post-chaise journey in the Naval Archive, pictured above, show that John Richards Lapenotiere wrote his name very plainly, without any French accents. So it may originally have been 'de la Pénotière' or 'Lapenotière', but the fine distinction seems hardly worth the bother considering how many mis-spellings the name received in the officer's lifetime.

While searching the archives for mention of Lapenotiere, Peter Hore found him variously documented as:
Often these mentions are given in the same publications: the Naval Chronicle was one of the most careless offenders.

You can't help but wonder whether having a name both hard to spell and to pronounce, compounded by the fact that it was of French derivation at a time of emnity against France, did Lapenotiere a disservice in his career. Luckily, his actions spoke for themselves.

Don't be like those dodgy journalists of yesteryear! Here's our playful guide for how we should probably pronounce our protagonist's name: