By:
Kathy Brown
On a blustery day in March, seven of the 14 award-winners from our short story competition visited HMS Victory in Portsmouth to receive their prizes from the Commanding Officer of the Navy's historic flagship.
Kathy Brown reports on our memorable event held to recognise seven talented young writers. 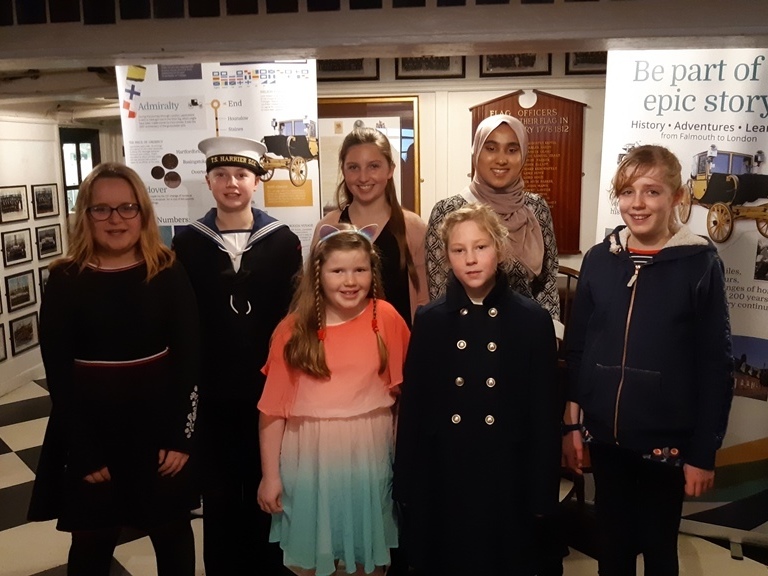 I, for one, was grateful not to be at sea on board HMS Victory on March 3rd. Having battled my way into Portsmouth's Historic Dockyard with my umbrella acting simultaneously as a shield and a sail, it was no surprise that our hardy (excuse my pun!) visitors arrived looking a little bedraggled on board our nation's flagship.

Of the 14 award recipients, we'd invited just the 1st and 2nd-prizewinners to visit HMS Victory to collect their certificates and prizes, and enjoy a private tour of the ship. What a marvellous setting it was. The lucky youngsters received their goodies from the Commanding Officer of HMS Victory himself, Lt Cdr Brian Smith. 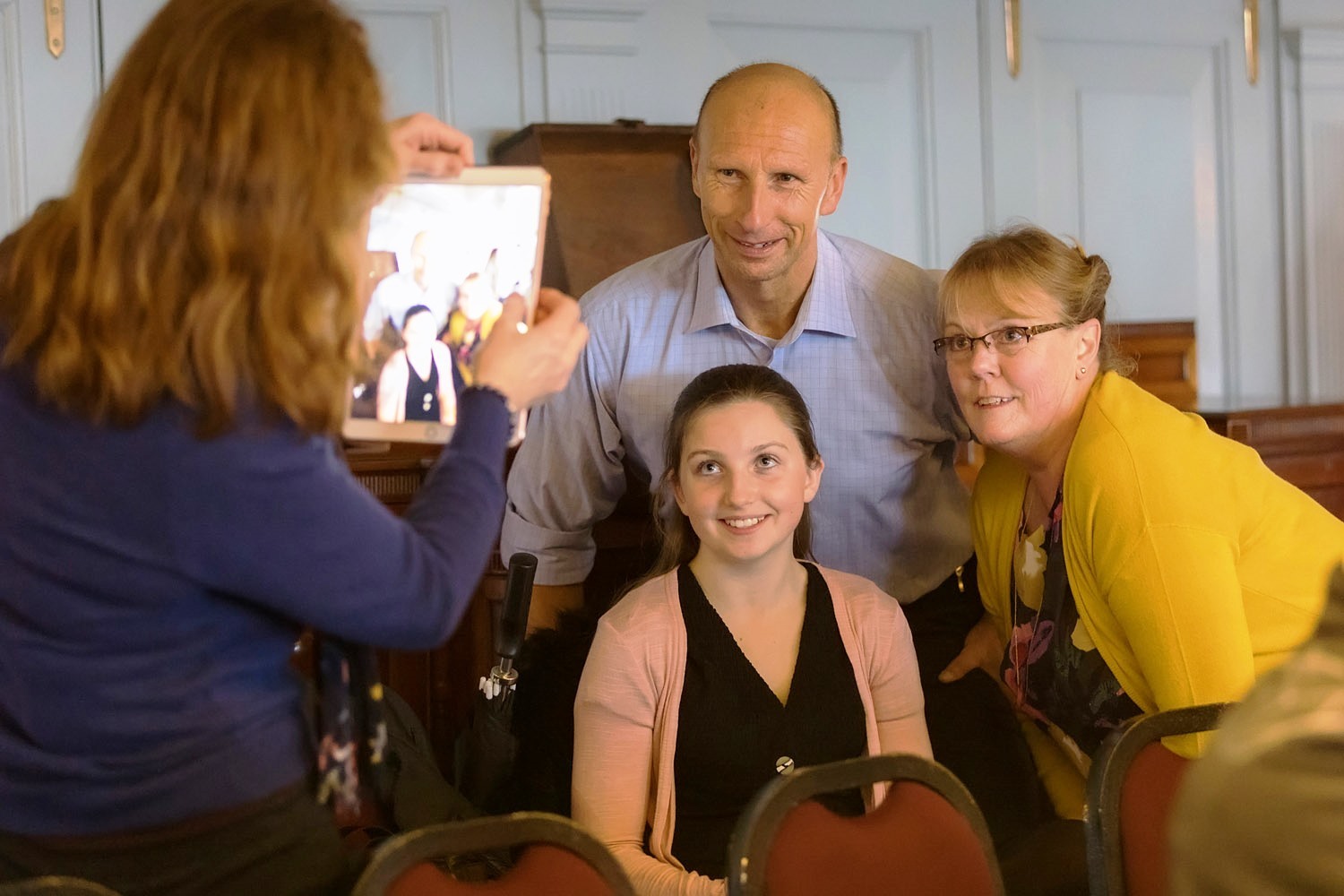 The winners and their families had travelled from as far afield as Falmouth in Cornwall and Milford Haven in Wales. Almost all our top prizewinners were girls. The exception, Alfie Anderson, from TS Harrier in Wales was one of our two sea cadet winners, and turned up in his 'number 1' uniform, proudly looking the part and saluting the C/O as he marched smartly up to receive his prize.
The biggest cash prize, £500, was awarded to 17-year-old Jenna Islam from Tower Hamlets in London, for her gripping and topical story, 'Knife Edge'. We chose this prize value to reflect the amount that Lt Lapenotiere received for travelling to London from Trafalgar carrying the official dispatches. 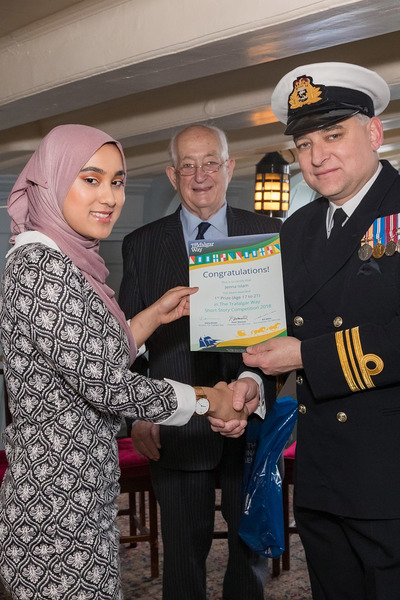 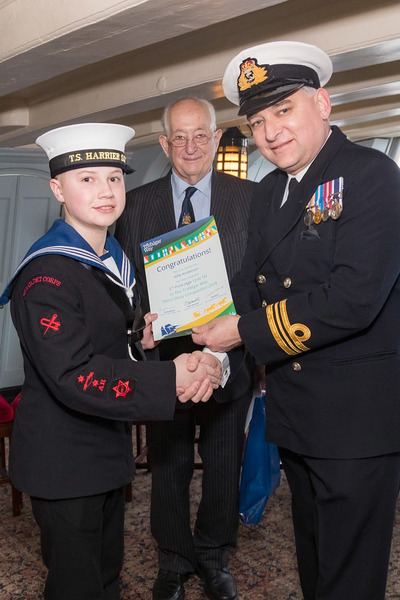 Present amongst the award winners were three students from a single school in Bagshot, Surrey. Hall Grove is situated directly on The Trafalgar Way and its buildings even show on the oldest maps from the time, so it already had a connection with our story. Pippa Stephens, aged 7, won the overall prize for school entries in the age category 7 to 11 and will receive a visit to her school from the post-chaise and horses. Her whole class will be allowed to take a ride in the school grounds, thanks to her lovely writing and her charming story, 'Winna the Warrior'. The judges loved her closing message,
"If you have an urgent message you have to tell everyone yourself, just in case they don't hear the drums." 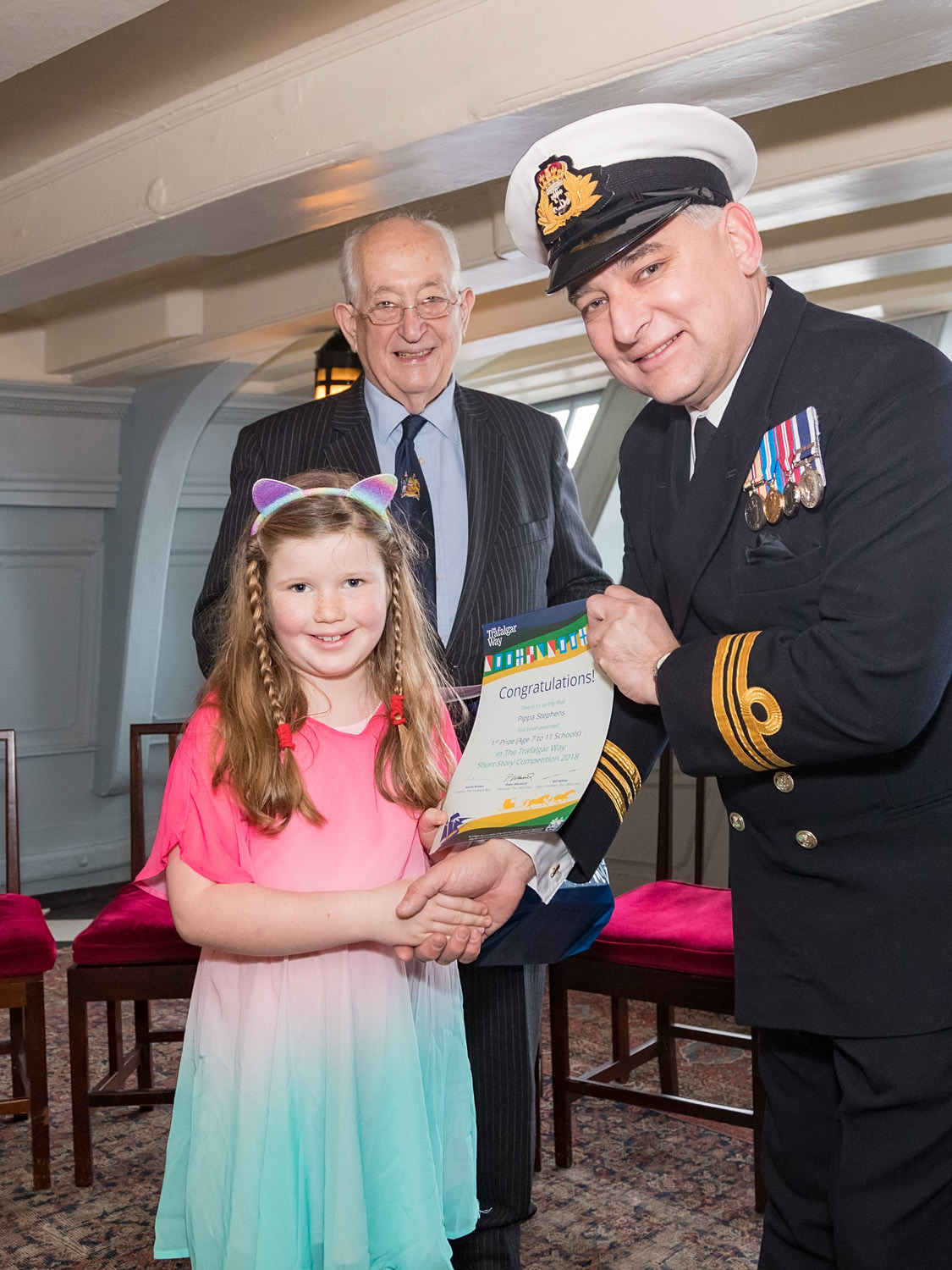 Prizes were awarded by Lt Cdr Brian Smith and The 1805 Club's Vice-chairman, Bill White.
Representing The Trafalgar Way and the judges were myself, Adam Preston, Alison Reijman, our Press Officer and Kate Jamieson, blogger and social media consultant.

Peter Hore, who had been on the judging panel for the competition and is himself a prolific writer and historian, closed the ceremony with some sound advice to the young writers, "Don't stop! Go home and write about your day!" 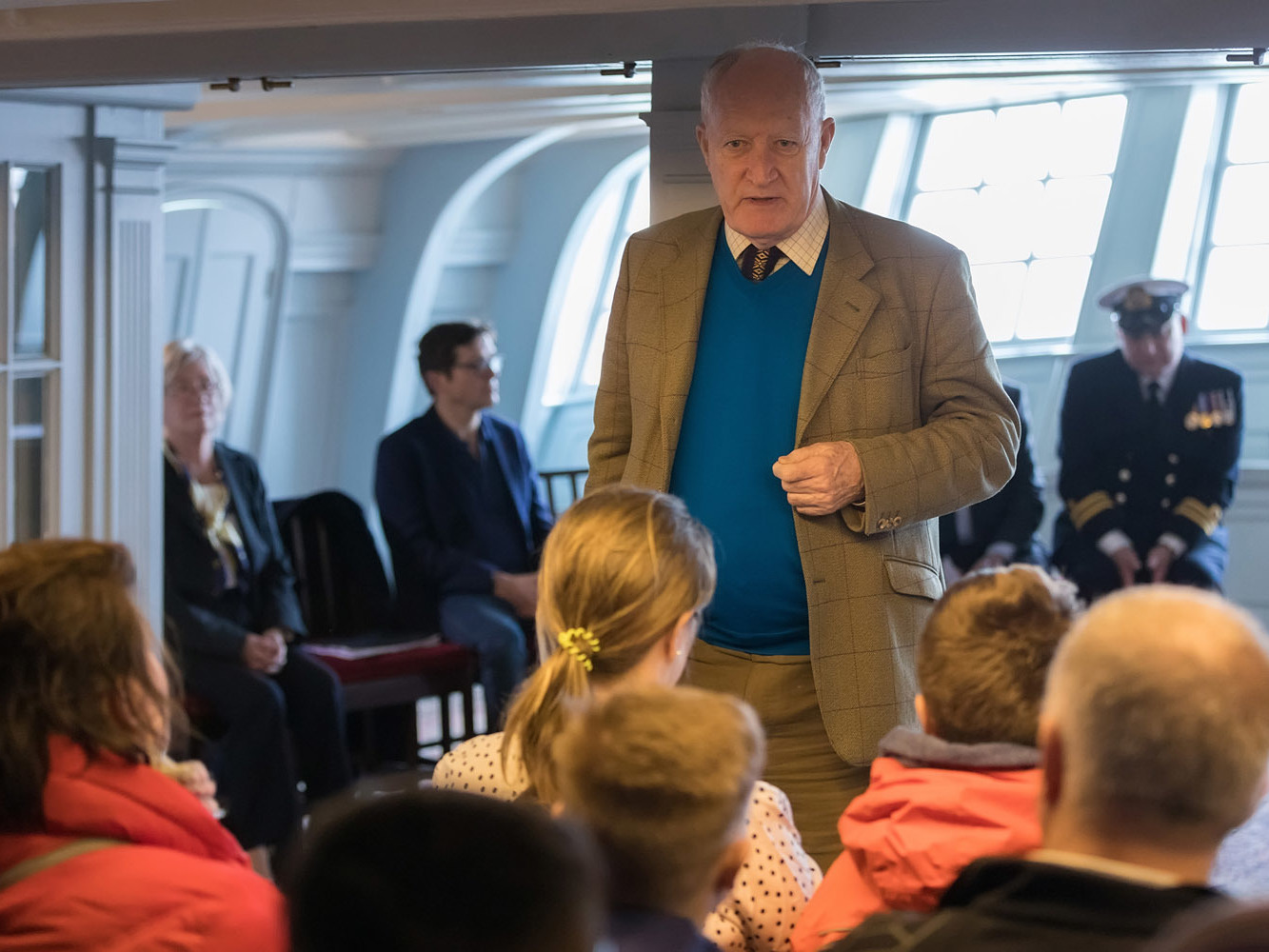 After a welcome breakfast and chat in the Senior Rates' Mess on board, the group headed out for an exclusive tour of HMS Victory, venturing above and below decks. The tour was thoroughly entertaining and our guide made us groan and laugh with his explanations of the naval lingo or 'Jackspeak' which evolved from life on board a wooden warship. I'll leave you to investigate the origins of the expression 'tow-rag'! 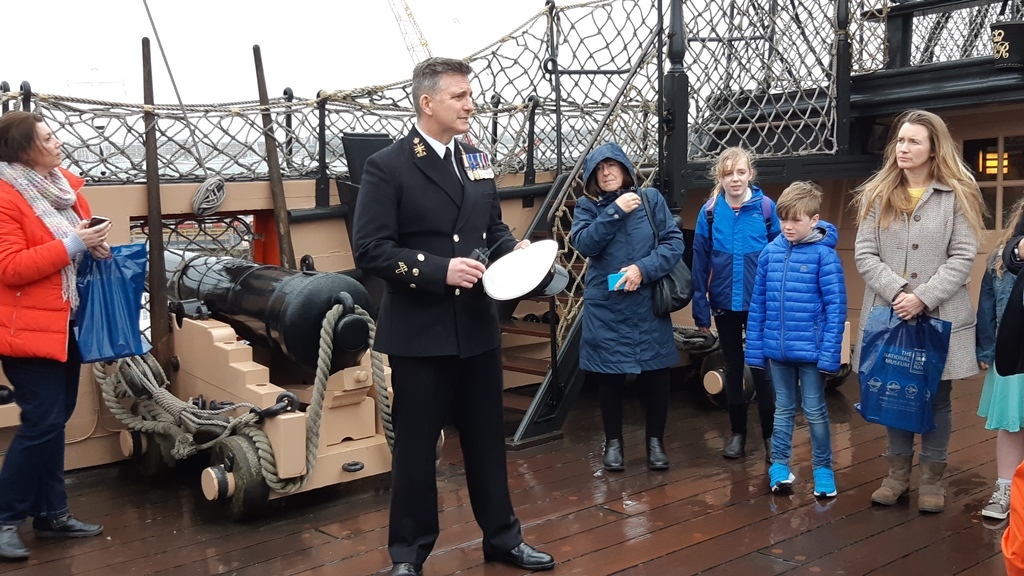 Having suffered a fractured upper arm a few years ago, I was particularly rapt by his gruesome explanation of how an amputation would have been conducted in the nineteenth century. The tour ended in the depths of the ship after the customary visit to the surgeon's deck to see the spot where Nelson died. 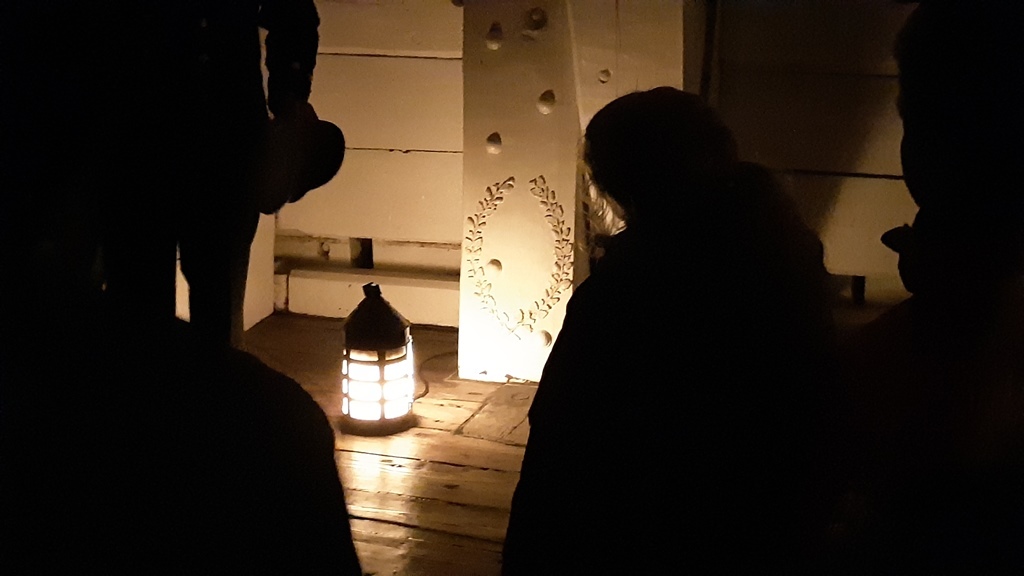 We had a great time meeting the young winners of our first Short Story Competition and sincerely hope they will go on to greater achievements, inspired by the day's ceremony and everything they saw and learned.

A very well done to (L-R) Eva, Cecilia, Pippa, Lilyanne, Hope, Alfie and Jenna.
A full list of winners and their prizes can be viewed here.