By:
Adam Preston
Adam Preston tells us about his experience of running the 2018 Short Story Competition for The Trafalgar Way 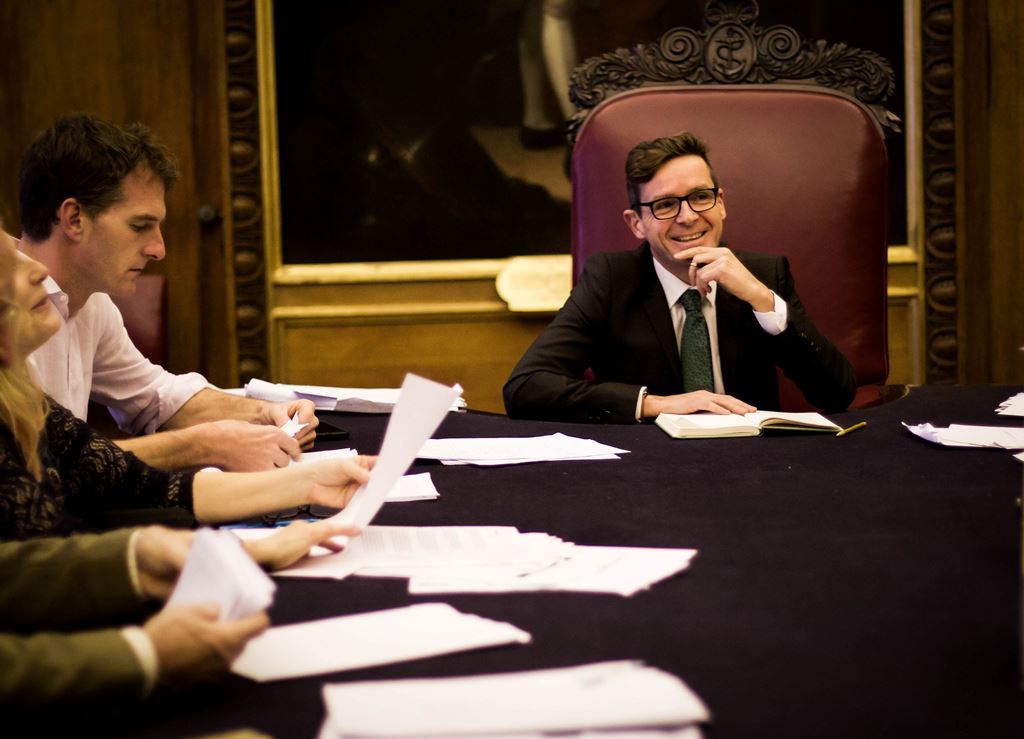 At The Trafalgar Way we are all about storytelling so last year we decided to launch a short story contest. Little did I know it was going to take me into one of England's most historic rooms and that one clever young woman was going to force us to re-write our own rules! The subject would be 'An Urgent Message' but this would be the only direct link with the story of the messenger who raced from Falmouth to London after the Battle of Trafalgar. By entering the competition young people would inevitably find out more about Lieutenant Lapenotiere's adventure  - and they would become part of the story themselves.
I know from experience that a short story contest is a great way to get people thinking about a subject but the biggest challenge is getting the word out and inspiring young people to write. My first job was to write a story myself, so I wrote my own imagined account of Lapenotiere's feverish post-chaise journey from Falmouth to London. This story was then made available on the short story section of our website and is still available here. 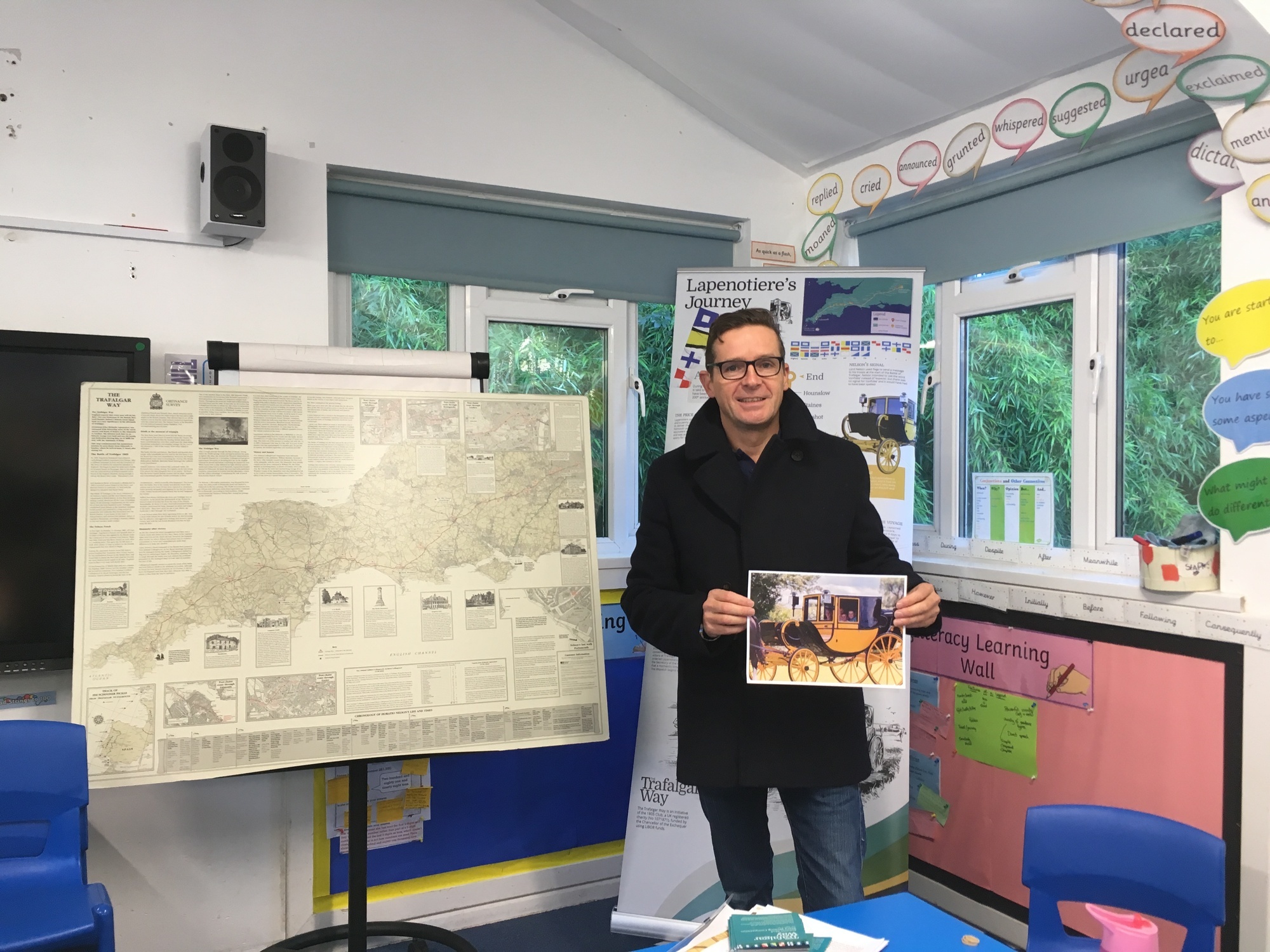 On a chilly but sunny September morning I launched the competition at at a delightful little village school called Blisland Primary in the presence of a reporter from BBC Radio Cornwall. Things got off to an amazing start because not only did Radio Cornwall then talk about the competition for the rest of the day but a literacy officer called Danielle Towe just happened to be visiting and, armed with our leaflets, she went off to tell a whole tranche of Cornish schools about the competition. What is more the headteacher at Blisland, Sarah Hawker, immediately put me in touch with the English department at Wadebridge Primary and I slotted in a talk afterwards (I'm delighted to say one of their pupils won 2nd prize and we had another Cornish winner from Falmouth). This gave me just enough time to get across to Nanstallon School where a television crew from the West Country's BBC Spotlight news programme were waiting to cover my next talk. 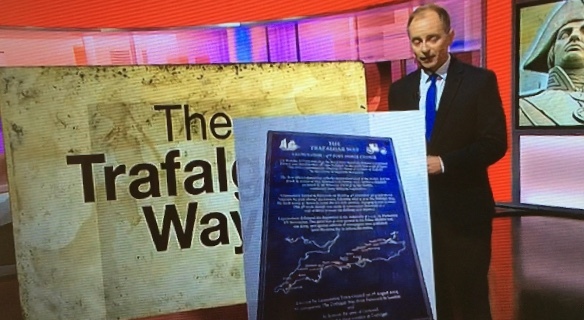 By the end of the day you'd have had to be practically hiding under a stone not to have heard about our competition if you lived anywhere west of Reading!
In the following weeks I was not unlike Lapenotiere myself - dashing about the country in a rush to get my message across. I spoke to thousands of children in schools from Egloskerry to Okehampton, Dorchester to Feltham in West London.
Meanwhile the director of The Trafalgar Way, Kathy Brown was also clocking up the miles and talking to schools in Exeter and Surrey. 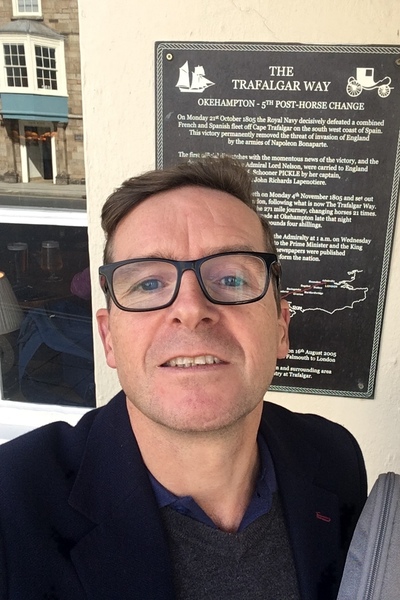 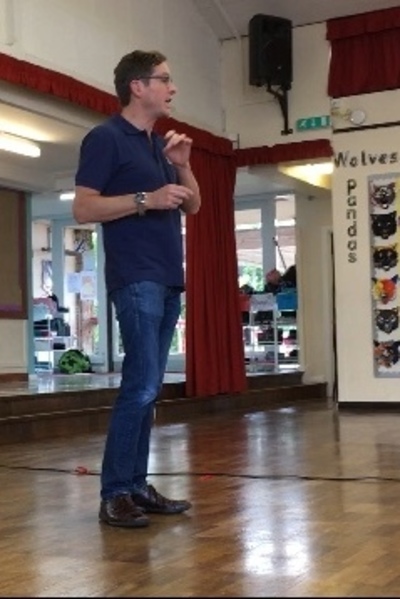 Soon the stories started to roll in and by the time of the deadline we had almost three hundred - a wonderful response.      Our judging panel had already been chosen and we were very lucky to get them. Peter Hore is the foremost expert on Pickle, the ship that carried the news of Trafalgar, and on Lapenotiere himself. We also had Megan Rix, the hugely popular author of animal adventure books and a young expert in Naval history and adventure blogger, Kate Jamieson (who scooped the GO Outdoors award for Outdoor Blogger of the Year on the day we judged the stories!) . I should probably also mention the broadcaster and historian Dan Snow who you might have heard of... Our director Kathy Brown would also sit on the panel and have the tricky job of casting the deciding vote if there was a stalemate. 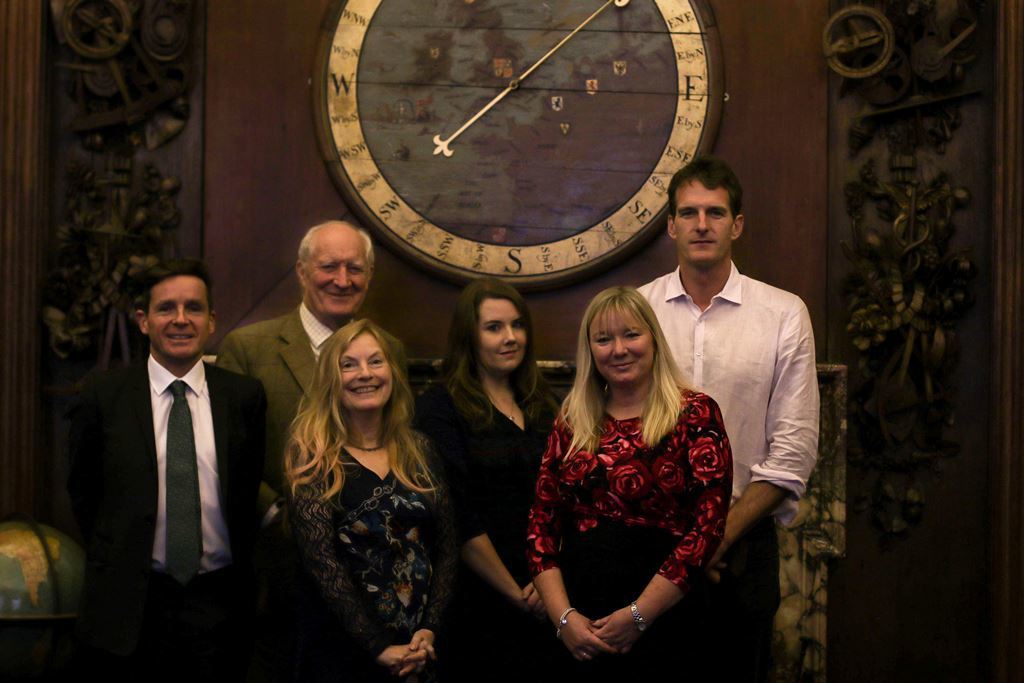 With such a large number of stories there was no way we could ask our busy judges to read them all so the task fell to me to whittle them down. I was nervous about this but I soon developed a technique. I love to read so in many ways it was a dream job - but some stories were hard going. Those were quickly eliminated. I also eliminated those that over ran the required word count and those where the story was good but the 'urgent message' was tacked on.
My next phase was to re-read the large number of stories on my 'long list'. At this stage I had to be ruthless, and I did not particularly enjoy it. How wonderful to find that so many young people are articulate and imaginative and all I can say is that if you wrote a story and didn't win a prize please don't be put off. You must keep writing!
In terms of subjects there were some very big favourites. The environment is clearly a huge issue for young people - as it is for me. The two World Wars clearly still loom large in the national consciousness, as do aliens! Perhaps that last one was my fault. When I spoke in schools I encouraged pupils to let their imaginations run wild and gave aliens as an example. But no subject was out of bounds and I did not mark anyone down for writing about anything - even if it was a popular subject. It was all about a good story well told. What I had not expected was so many funny stories - it is a while since I have actually wept with laughter but that happened several times. 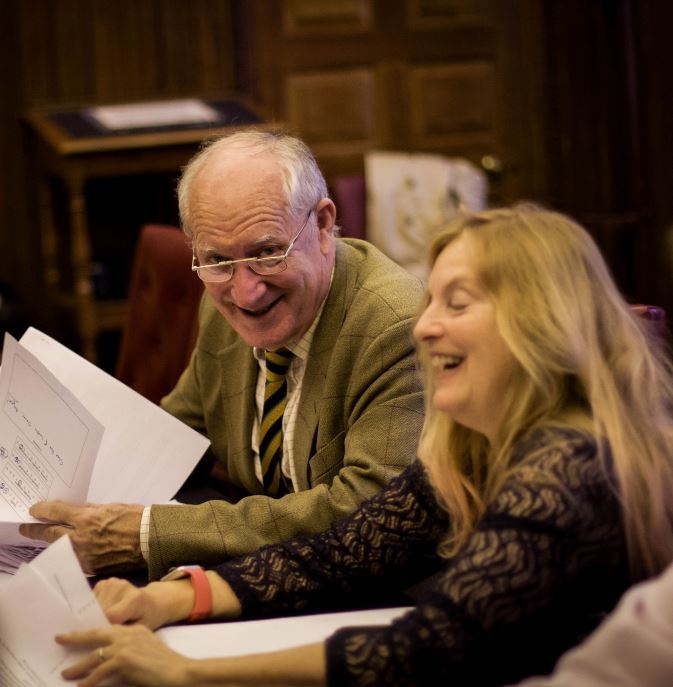 I was really looking forward to the judging of the shortlisted stories. We had an awesome collection of judges, but even more excitingly Peter Hore had managed to arrange for us to judge the finalists in the old Admiralty Board Room in Whitehall. This is the actual room where Lieutenant Lapenotiere delivered the Trafalgar dispatch 113 years ago.
Dan Snow was managing to fit in judging our competition around a busy schedule that included a trip to Timbuktu so it was fantastic to see his towering figure waiting in the foyer of the Department for International Development.  This department now occupies the buildings that once housed the Admiralty. The historic Board Room is an extremely precious part of our national heritage. It contains some of the most remarkable surviving Grinling Gibbons carvings as well as an important Nelson portrait and other extraordinary artefacts such as Winston Churchill's trunk. You are not permitted to consume so much as a biscuit in the room but as we were all history buffs nobody was complaining. 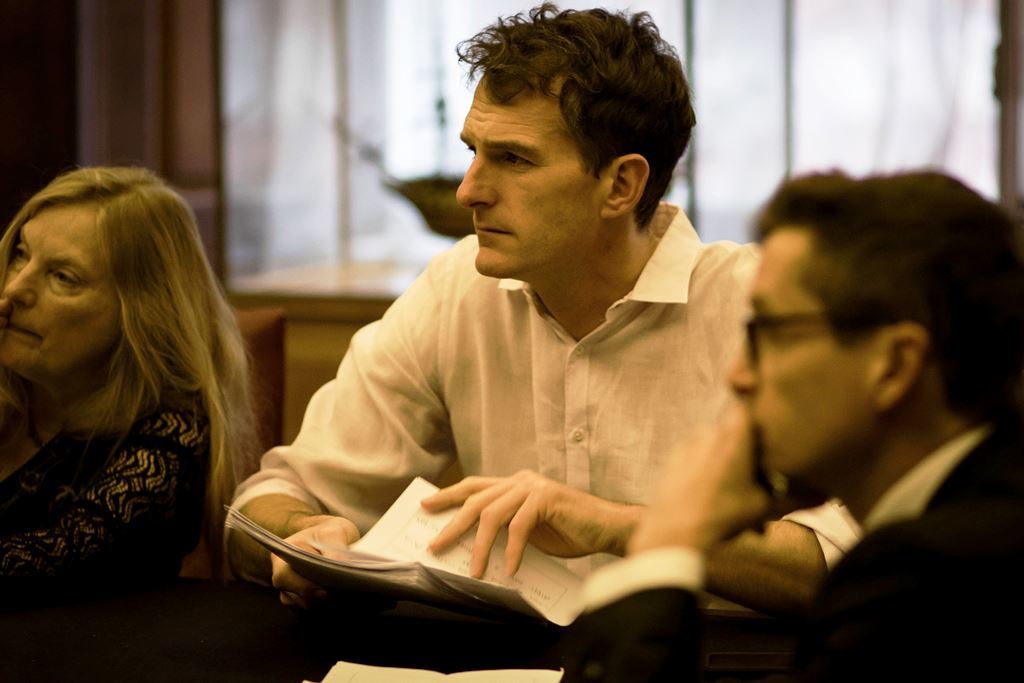 There was lively discussion at the judges' meeting but to my immense relief we were all pretty much in agreement about which were the best stories and I was particularly delighted that my favourite story of all - a witty tale by Hope Wood - was voted the winner in the 12-16 category. The story is a delightful account of an authoress's adventures on a cruise ship.
We had been very careful to judge all entries blind, meaning that neither I nor the appointed judges knew the name, age, sex or school of any entrant in order to ensure absolute fairness. 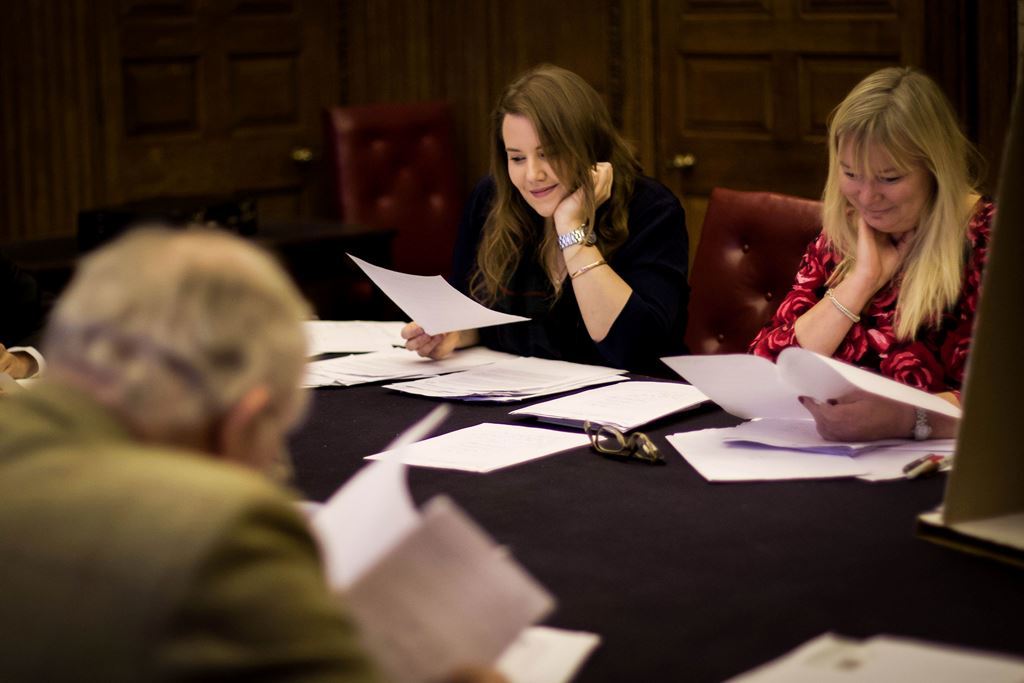 Once the winners were selected we had great fun finding out just who had won and there were some interesting revelations. The majority of winners were female (10 across the different categories as opposed to 4 boys). Genuinely amazing, however, was the fact that no less than five award winners came from one single school - Hall Grove. This was one of the schools where I did a talk and I had met the headmaster, Alastair Graham. The school was started by his father in 1957 and is a rare family-run prep that, unusually, has been mixed-sex right from the start.  When I congratulated Alastair he replied modestly that "Creative writing is something we are very keen on." You could say that! When I had lunch in their canteen I found myself seated next to their dramatist in residence!
I'm delighted to say that it is Hall Grove that will be receiving the visit by the post-chaise horse and carriage because their pupil Pippa Stephens, aged 7, wrote the winning story in the 7-11 schools category. What is wonderful is that this event will add to the school's already-rich tradition of historical connections. For example Nelson is reputed to have stayed the night, probably on his way to Portsmouth. In fact two upstairs rooms are named after him - they have a Nelson Bedroom and the Nelson Dressing Room. They also have a print taken from the old coaching route guides on their wall - the type of thing that is something of a bible to us at The Trafalgar Way. 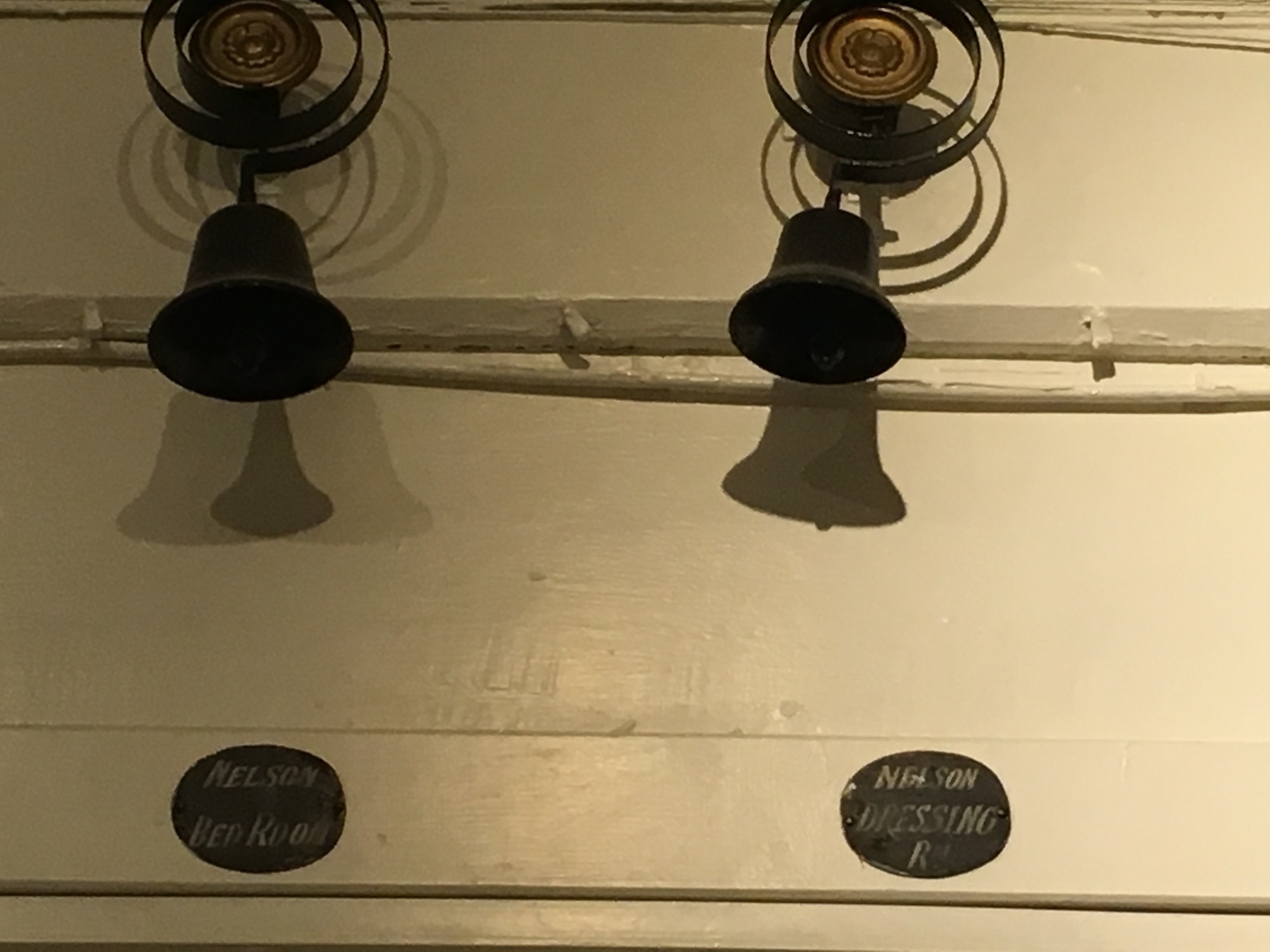 One thing worth remarking is that we did not attract very many stories in the oldest age category of 17-21. I had worked hard to promote the competition to this age group but maybe 17 to 21-year-olds have enough on their hands. In the end we decided that only one story from this age group was deserving of a prize (and publication).  But then a problem arose.      The story was sent in by a resident of Tower Hamlets which is not one of the London districts through which The Trafalgar Way passes. Nor is the entrant in the Navy or a Sea or Marine Cadet either. But she is a London resident and there is no doubt that the capital, the seat of government where the news of Trafalgar arrived, plays a huge role in The Trafalgar Way story. However I wanted to be sure that we were on safe ground and that nobody could accuse us of bending the rules.  Our judges agreed that the story was excellent but asked to be assured that the terms and conditions of the competition allowed us to award it a prize. I checked and we do have the right to widen the parameters if we deem it necessary. So congratulations to Jenna Islam who has won £500, will be presented with her prize on HMS Victory and will be published in our special book. Now that is a story!
You will soon be able to read all the winning entries in an e-book and paperback to be published on Amazon.
Read Adam Preston's story An Urgent Message here.
Read about the Prizegiving Ceremony on board HMS Victory here.