A transcript of the timeless message, proclaimed and delivered from town to town in summer 2005 along the newly-inaugurated Trafalgar Way. 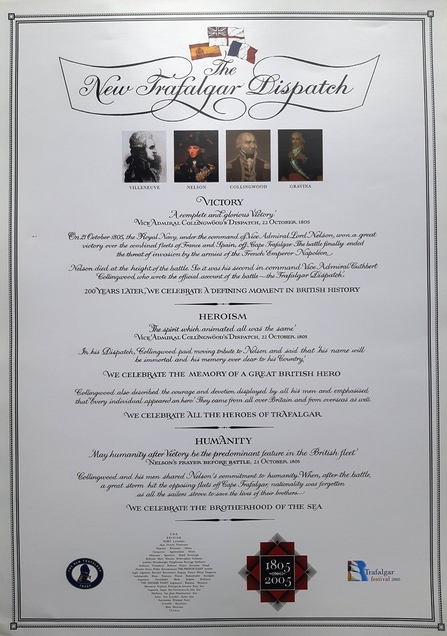 In August 2005, an evocative journey was begun. Actor Alex Price, playing the part of Lt John Richards Lapenotiere, came onshore at Falmouth and delivered a new proclamation to HRH the Princess Royal, as the first of the plaques of The Trafalgar Way was unveiled on The Moor. The words of this proclamation encapsulate the three core elements of Collingwood's original message from Trafalgar, which, in their turn, reflect and augment the ethos and instructions of Lord Nelson himself. The 'New Trafalgar Dispatch' as this proclamation was titled, was then delivered along the entire length of The Trafalgar Way over the course of the next five weeks.

Read about the events of the 2005 inauguration.

The following is a transcript of the New Trafalgar Dispatch, as proclaimed and presented to honoured recipients and dignitaries from towns, villages and cities along the route in 2005.

'A complete and glorious Victory'

On 21st October 1805, the Royal Navy, under the command of Vice Admiral Lord Nelson, won a great victory over the combined fleets of France and Spain, off Cape Trafalgar. The battle finally ended the threat of invasion by the armies of the French Emperor Napoléon. Nelson died at the height of the battle. So it was his second in command Vice Admiral Cuthbert Collingwood, who wrote the official account of the battle - the 'Trafalgar Dispatch'.

200 years later, we celebrate a defining moment in British history.

'The spirit which animated all was the same'

In his Dispatch, Collingwood paid moving tribute to Nelson and said that 'his name will be immortal and his memory ever dear to his Country.'

We celebrate the memory of a great British hero

Collingwood also described the courage and devotion displayed by all his men and emphasised that 'Every individual appeared an hero'. They came from all over Britain and from overseas as well.

We celebrate all the heroes of Trafalgar

Collingwood and his men shared Nelson's commitment to humanity. When, after the battle, a great storm hit the opposing fleets off Cape Trafalgar, nationality was forgotten as all sailors strove to save the lives of their brothers.

We celebrate the Brotherhood of the Sea. 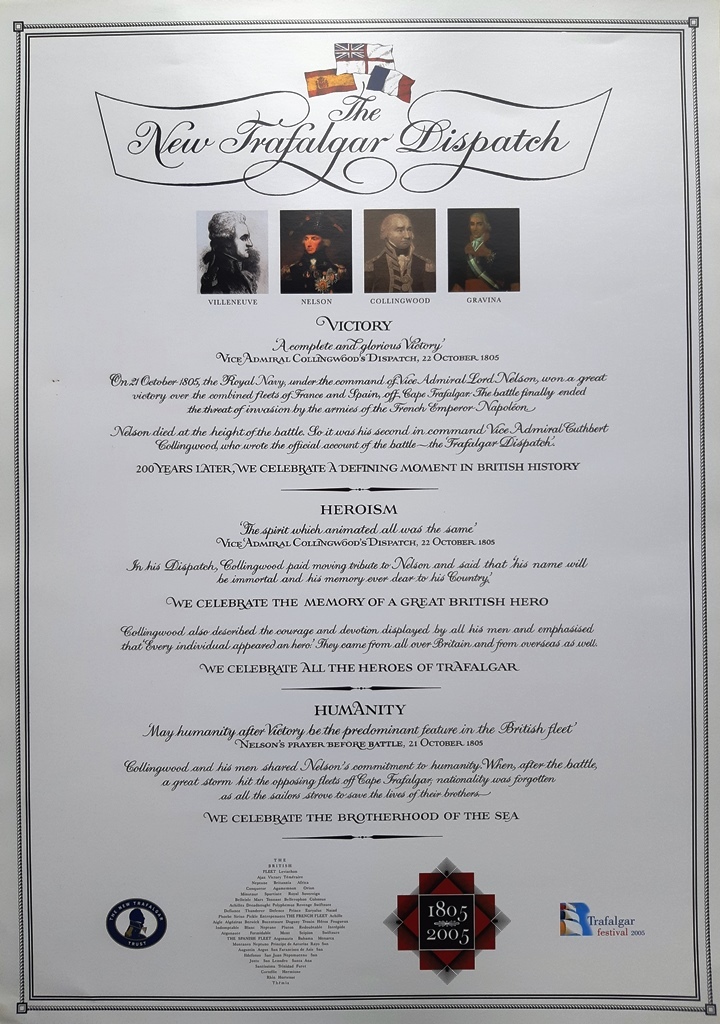