The following format works well for a large gathering. It comes from a description supplied to us by Matthew, a retired Warrant Officer with a long history of attending Pickle Night events!

Note for civilians - Naval etiquette demands that the port is always passed to the left!

Rig/dress is quite easy. White trousers, blue and white striped top, a straw boater hat with HMS Pickle cap tally (see here to purchase one of these hats). Be aware you can be reported to the Master at Arms for looking too much like a pirate or wearing a wristwatch. Watches and phones are anachronous to the occasion and therefore forbidden.

Ed: I guess if you want to take photos on a smartphone you will need permission or else to be very sneaky and try to avoid being ratted!

Music is played and sung and normally consists of traditional Sea Shanties. Some Pickle nights include singing competitions between gun crews. The competition may be judged on any set of criteria decided by the Mess President.

Food is normally soup for starter, meat and veg for main and a desert. Everything is eaten off a single plate. You can use your bread to clean your plate between courses.

Matthew's word of warning, "If you have to leave the table always take your spoon with you as a spoon that’s 'been left loafing' will always disappear. Trust me it’s no fun eating steamed pudding and custard with your fingers!!" 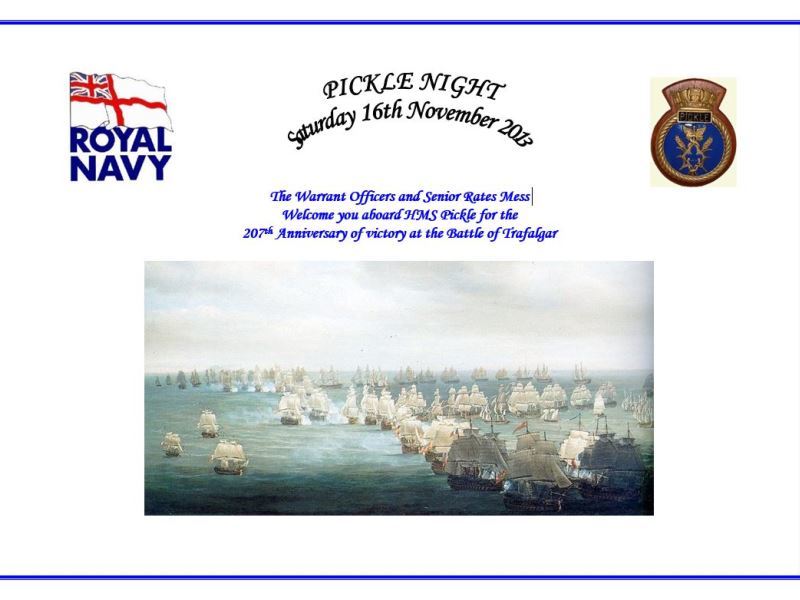 The programme for the evening proceeds along the following lines:

Got a question? If you have been detailed with organising an official Pickle Night and would like further guidance, please get in touch and we'll try to link you up with someone who can advise.

Let us know how your Mess Pickle Nights are conducted

Tell us your story