How The Trafalgar Way came to be (Part 4)

Part 4 - The Trafalgar Way Developments since 2005 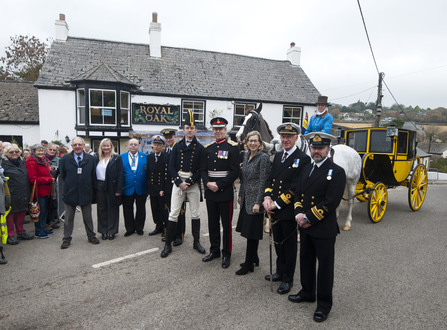 Immediately following 2005, the funding available was limited and entirely directed to erecting further plaques requested along the route. As mentioned elsewhere, they now amount to 39. However, this indicated to us that there was still great interest in the project and a desire to be associated with it. I therefore felt that it might be possible to build on that foundation.

Accordingly, in 2017 and with the support of the President of The 1805 Club, Admiral Sir Jonathon Band, I applied to the Chancellor of The Exchequer for a grant of just short of £0.5million from the LIBOR fines to fund six naval history projects. I am glad to say that the application was successful.

The largest of projects was for the use of The Trafalgar Way as a foundation for a wide range of activities with a naval connection. I allocated some £260,000 to the project in the belief that with a sound and creative management approach, this could be very successful. By way of a professional executive search, we secured the services of Kathy Brown, who was appointed as a paid project Director for The Trafalgar Way in early 2018. She has taken a wide range of initiatives, including essay and art competitions along the route and numerous local events. There is discussion around a campaign to organise the planting of oak trees every ten miles along the 270 mile route each representing one of the 27 British ships of the Line at Trafalgar. However, I feel that there remains a need to bring The Trafalgar Way even closer to the Royal Navy, perhaps by way of better links to Royal Naval Associations and Sea Cadet Units as well as the Service itself. One of the aims of setting up the project in 2005 was to establish a stronger inland awareness of the Service and its achievements that could be built upon. It might, for example, provide a platform for recruiting initiatives.

Ed: we remain very keen to establish stronger links between the Royal Navy and The Trafalgar Way and welcome suggestions for initiatives which do so. Please use the form below, right, to sign up for newsletters and remain updated on activities which celebrate the naval theme and provide opportunities to link naval organisations with The Trafalgar Way and its communities.

Missed a bit? Return to Part 1 of this series of articles.