The eleventh stage of Lapenotiere's journey by post-chaise.

<<Back to Axminster| Onward to Blandford Forum >>

Bridport has Saxon origins and used to be a centre of the rope-making industry. In 1211 King John ordered that Bridport make “as many ropes for ships both large and small and as many cables as you can.”

Fishing nets were also made in the town and it is these industries, with their particular requirement for space, which gifted the town its distinctive and beautiful wide main street. Ropes and nets were once made in the long gardens behind the houses then dried in the street. Even hangman’s ropes were made and the phrase “stabbed with a Bridport dagger” used to be slang for “hanged”.

The Trafalgar Way plaque, commemorating the fact that Lieutenant Lapenotiere changed horses in Bridport, can be found on The Bull in East Street.

Bridport often appears in the Wessex novels of Thomas Hardy in which he gave it the name Port Bredy. Some of the oldest buildings are on South Street including the 13th Century St. Mary’s parish church, the 14th century chantry and the 16th century Bridport Museum. Many buildings, particularly on the main street, date from the 18th century including Bridport Town Hall with its clock tower and cupola.

The town has become something of a centre for the arts and an image of an event or performance in the town could make a great “Post Card from the Trafalgar Way”. There is a literary festival, Bridport Food Festival at Asker Meadows, which concludes with the Round Table Beer Festival. There is also the annual Hat Festival every September - a particularly visual spectacle and a promising source of striking images. The Trafalgar Way attended the festival in 2019 with their own Lieutenant Lapenotiere in early 19th Century naval officers uniform. There is an annual Christmas Tree Festival at which over 60 trees are decorated in the United Church, and an annual carnival on the third Saturday in August. This features a parade of floats, fete, funfair, live music and a torchlight procession culminating in a huge bonfire and fireworks at West Bay. A very rich potential source of images!
Return to overview 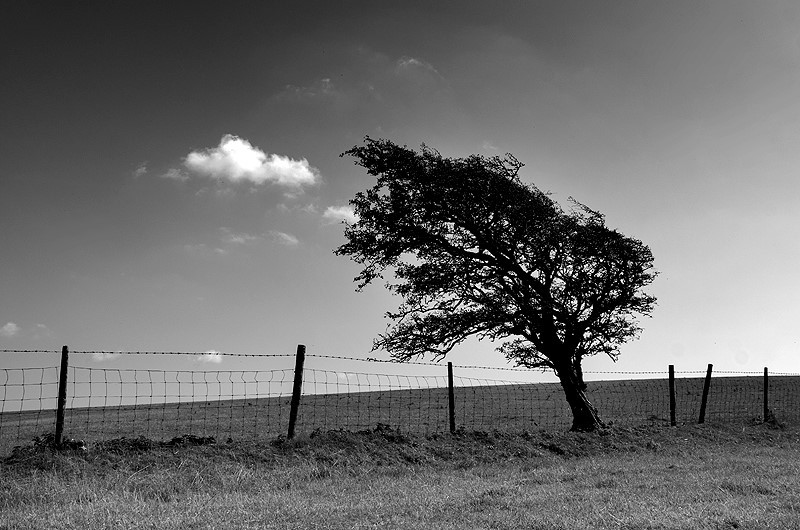 This lonely tree has been battling the prevailing winds on this hillside for a VERY long time!  Photo © Ian Gregory

Once known as Bridport Harbour, West Bay is sited at the mouth of the River Brit 1.5 miles south of Bridport on the Jurassic Coast - a World Heritage Site. The main commercial trade of the harbour in its heyday was the export of Bridport’s ropes and nets, although shipbuilding also thrived from the late 18th to the mid 19th century. When the railway arrived in 1884 the economy shifted to tourism as it became a popular resort.

A distinctive feature is Pier Terrace which was built in 1885 and was used as a training ground for the Dieppe Raid in 1942 because it had a similar appearance to French ports. The view from East Beach towards East Cliff has become almost iconic due to its appearance in the ITV series Broadchurch.

To the south east of Bridport lies Burton Bradstock, not strictly on The Trafalgar Way but it plays a unique role in the story. When Lieutenant Lapenotiere passed through Bridport in 1805 he was not only carrying Admiral Collingwood’s account of the great victory and death of Lord Nelson. He was also carrying a letter from Captain Hardy to the Roberts Family who lived at Burton Bradstock. Francis Roberts’ 20 year old nephew, a midshipman, was serving in Victory . Thus the family were amongst the first in England to receive news of the battle. We will accept entries to our competition which feature Burton Bradstock.

Less than a mile east of Bridport on The Trafalgar Way lies the village of Walditch which has a real tennis court on the site of which Henry VII played during visits to the area. South east of Walditch is Shipton Gorge with its hilly surroundings topped by Shipton Hill which has good views of the countryside and evidence of a prehistoric settlement.

North of The Trafalgar Way is the village of Loders where a priory was founded during the reign of Henry I. The monks were reputedly the first to introduce cider-making into Dorset. Further east the village of Askerswell has twenty structures that are listed by English Heritage for their historical or architectural interest including the parish church and Eggardon Farmhouse. South of the A35 is the tiny hamlet of Chilcombe comprising of Chilcombe Church, an 18th century farmhouse and a couple of cottages. In the Domesday Book it is listed as having 14 households, while the current population is 10!

Long Bredy is surrounded by the remains of prehistory including a burial chamber known as The Grey Mare and her Colts. Nearby is Kingston Russell House, the birthplace of Thomas Masterman Hardy, captain of The Victory at the Battle of Trafalgar from whom Nelson famously requested a kiss in his final moments.

Winterborne Abbas, just west of Dorchester, has probably the best example of a stone circle in Dorset nearby. Known variously as the Nine Stones Stone Circle, The Devil’s Nine Stones, the Nine Ladies or Lady Williams and her Dog, it is believed to have been erected during the Bronze Age. Modern Druids perform religious ceremonies here which could make an interesting “Post Card from the Trafalgar Way” but if you are taking photographs be sure to ask their permission. If any druid’s face appears prominently in your image you will also need to get them to sign a form granting permission for the image to be used by The Trafalgar Way. Download a release form here.


The new town of Poundbury


Heading east into Dorchester you will pass through the new town of Poundbury which was built according to the principles of Charles, Prince of Wales. The idea was to create an integrated community of shops, businesses and private and social housing - all designed around people rather than the car. A unique town with lots of potential for great images. 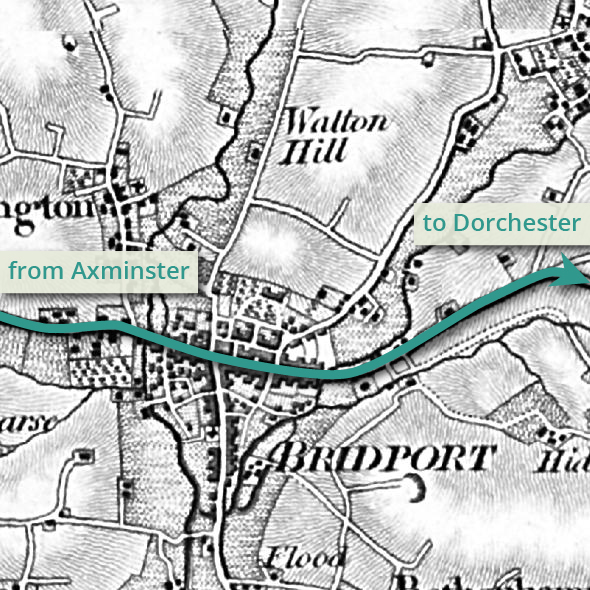 The route through Bridport