Hounslow to the Admiralty

The final stage of Lapenotiere's journey by post-chaise.

<<<Back to Falmouth| <<Back to Staines

At Hounslow it is suggested (mostly by us, under artistic licence!) that Lieutenant Lapenotiere became lost in the fog as he approached London late on the 5th November 1805 - incidentally the 200th anniversary of the Gunpowder Plot.  The Trafalgar Way plaque is in the foyer of the Holy Trinity Church on the High Street. Hounslow is now a large suburban town. Historically the settlement was centred around Holy Trinity Priory which was founded in 1211, and the junction of the Bath Road and the Staines Road at the Bell Inn. In the 1920s the construction of the Great West Road attracted the building of many factories and headquarters of large companies. Now Hounslow Town Centre is a busy predominantly retail centre with a small number of offices and civic buildings. You can find a vast array of food and refreshments here from all sorts of cultures. What would Lapenotiere have made of such choice, we wonder!

Hounslow has produced an unusually high number of music stars including Phil Collins, Elvis Costello, Sophie Ellis Bexter and Ian McLagan, keyboardist of the Small Faces and later the Faces. 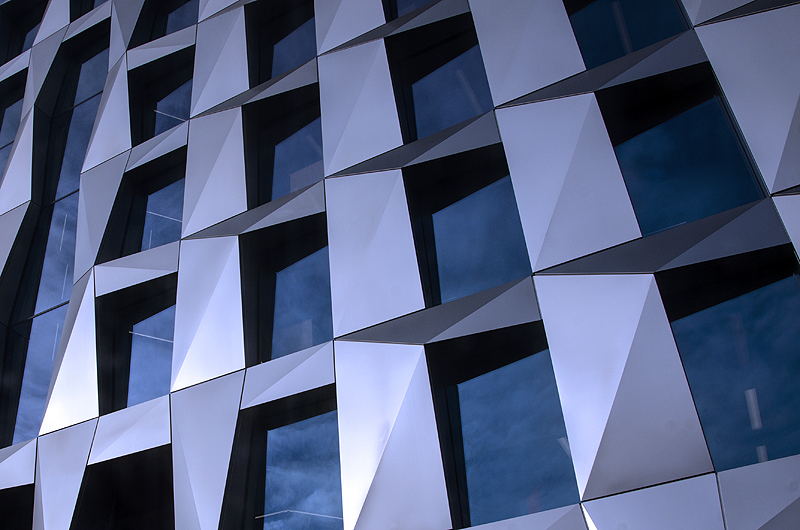 Finished in only 2019, the geometric details in Hounslow's new Civic Centre also bring a softness to the overall shape. Image © Ian Gregory

To the north of Hounslow, Osterley Park is one of the largest open spaces in London and boast a fine Robert Adam house built in the late 18th century and now owned by the National Trust.

Brentford lies at the confluence of the River Brent and the River Thames and is the first point on the tidal portion of the Thames that was fordable by foot, making it an important crossing point going back into the mists of time. It is believed to have been a meeting point for pre-Romanic tribes and Julius Caesar is reputed to have crossed here during his invasion of Britain in 54 BC.  The Trafalgar Way crosses the River Brent on the High Street.

A local town fair, called the Brentwood Festival, has been held in Brentwood every September since 1900.

In 1805, when Lieutenant Lapenotiere came through Brentford in a post chaise express the start of operations of the Grand Junction Canal - later the Grand Union Canal - had just begun. Both Pocahontas, the native American princess, and John Quincy Adams, 6th President of the United States, lived in Brentford.

Brentford High Street served as the main road from London to the South West for many centuries.

Later King George V opened the Great West Road and the Brentford section became known as the Golden Mile due to the large number of factories that relocated there.

At 195 High Street Brentford there used to be a historic coaching inn, The Three Pigeons, which was well established by Elizabethan times. In 1798 a great dinner was held at this historic inn to celebrate Nelson’s victory at The Battle of the Nile, at which eleven haunches of venison were served - one for each ship taken during the battle. The inn eventually closed in 1950.


Immediately to the south of Brentwood is Syon House and Park which have a particularly rich history. From here Henry VIII’s wife Catherine Howard was taken to the Tower of London to be executed. Henry VIII’s body was later placed here the night before he was buried at St. George’s Chapel, Windsor. Both the house and grounds are open to the public.

The Trafalgar Way now joins the Chiswick High Road through Turnham Green where there is a Neo-Gothic church designed by George Gilbert Scott, architect of the Midland Grand Hotel, St Pancreas Station, the Albert Memorial and the Foreign and Commonwealth Office. The green is the site of many local events such as travelling funfairs.

The King’s advance on London was halted at the Battle of Turnham Green on the 13th November 1642 during the First English Civil War.

The Trafalgar Way now continues to follow the Chiswick High Road or A315 which becomes King Street after it passes the end of Goldhawk Road.  Shortly after this, immediately to the north, is the 20 acre Ravenscourt Park, whose origins lie in the estate of Palingswick Manor which was first recorded in the 12th century.  The lake in the centre of the park is the remains of the moat which once surrounded the manor in the 13th century. In the 14th century Alice Perrers, Edward III’s mistress, lived in the manor. In 1941 the house was severely damaged by incendiary bombs and only the stable block remains - now the Ravenscourt Park tea house. The park opened in 1888.

Continuing east towards central London King Street takes you into Hammersmith, which derives its name from the fact that it would have once had a hammer smithy or forge.  Hammersmith Bridge was the first suspension bridge to cross the Thames although the original bridge had to be largely replaced in 1887. At Hammersmith what is generally regarded as the world’s first plant nursery was established at the beginning of the 18th Century, called Vineyard Nursery.

The Trafalgar Way plaque can be found in the lobby of the Salutation Inn on King Street, the main shopping street of this busy London district. On King Street you’ll find  a shopping mall, the Town Hall, the Lyric Theatre and the Polish community centre which contains a theatre, an art gallery and several restaurants. At the time when Lieutenant Lapenotiere passed in 1805 the coaching inn was The Windsor Castle Inn which no longer exists.

The Dove public house is the only surviving trace of the old Hammersmith Village which was largely demolished in the 1930s. It is listed in the Guiness Book of Records as having the smallest bar room in the world. It was frequented by Graham Greene and Ernest Hemmingway and James Thomson is reputed to have written Rule Britannia here.

The pedestrianised riverside at Hammersmith is home to pubs, rowing clubs and the riverside park, Furnival Gardens.

From Hammersmith The Trafalgar Way heads along the A315 to Kensington High Street. The route is now taking you through the centre of one of the world’s great capital cities and there are too many features of historical and visual interest to mention here! At Holland Park the Trafalgar Way plaque is on the railings by the entrance way to Holland Park on the High Street.

At Knightsbridge the Trafalgar Way follows the A4 to Hyde Park Corner where the driver of Lieutenant Lapenotiere’s post chaise express carriage had the choice of either heading towards Piccadilly or taking Constitution Hill. He is believed to have gone via Piccadilly but his rival, who is reputed to have been close behind him, perhaps chose Constitution Hill.

From Piccadilly Circus the route heads down Haymarket and into Cockspur Street. Nowadays you then enter Trafalgar Square, which of course would not have existed at the time that Lapenotiere was racing towards the Admiralty as it celebrates the very battle about which he was carrying news!  A Trafalgar Way plaque is located on the railing at the front of the Canadian High Commission.

From here The Trafalgar Way turns into Whitehall, or the A3212. The Trafalgar Way plaque is at 26 Whitehall on the Adam Screen, inside the colonnades at the lefthand end. The old Admiralty Board Room, still exists exactly as it was when Lieutenant Lapenotiere burst through the door at 1am on the 6th November 1805 and declared “We have gained a great victory, but we have lost Lord Nelson.” The room is only very occasionally open to the public and is inside what is now the Department for International Trade and Development, who kindly gave permission for Dan Snow and others to use the room for the final judging of The Trafalgar Way’s 2018 short story contest. 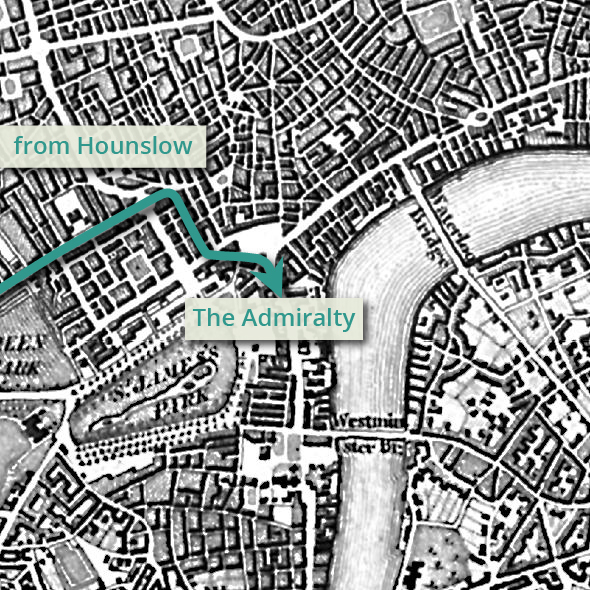 The route to Whitehall

The route into London

It was a straight run from Hounslow into London, most of which was still countryside in the time of Lapenotiere. The area didn;t really become built up until about Holland Park and Kensington.
Apsley House, then known as '1 London' was built at that time, but not home to the Duke of Wellington just yet. There would have been one final toll for Lapenotiere to pass through at that location, before he entered Piccadilly.
The area we now know as Trafalgar Square was a mews and parade ground for the Cavalry. You can read more about the history of Trafalgar Square here.
Have fun exploring!