The fifteenth stage of Lapenotiere's journey by post-chaise.

<<Back to Woodyates| Onward to Overton >>

Salisbury is a cathedral city on the edge of Salisbury Plain at the confluence of the rivers Avon, Nadder, Ebble, Wylye and Bourne. The Cathedral itself was built in the 13th Century and holds an original copy of the Magna Carta which is the best preserved of the four surviving copies.  It has the tallest spire in the UK, one of the oldest surviving mechanical clocks in the world, and is considered a masterpiece of Early English architecture.

The cathedral used to be located at Old Sarum, which was the seat of the bishops of Salisbury during the early Norman period. Tradition has it that this early cathedral was largely destroyed by a storm just five days after it was completed. Only the foundations remain but Salisbury continued to be officially named New Sarum right up until 2009. The site of the new cathedral is reputed to have been selected by firing an arrow from Old Sarum - but it is more than 3 km away.

Salisbury has an old city wall with five gates. The English parliament met here in 1324, 1328, and 1384 and Charles II held court in Cathedral Close during the Great Plague of London. Cathedral Close is separated from the rest of the city by three gateways. Here you will discover a number of well-preserved Elizabethan and Georgian houses. One of these, Arundells, is the former home of Prime Minister Edward Heath and is now open to the public. You can visit Mompesson House with its rare collection of period furniture and great tearoom! There is also the Wardrobe, a 13th Century manor which houses The Rifles Berkshire and Wiltshire Museum. The excellent Salisbury Museum which is located in The Kings House and Sarum College are also in Cathedral Close.

It is worth having a wander in the Old City centre which is chock full of delightful architecture dating from medieval times. Look out for the wide market place, Poultry Cross, the 18th Century Guildhall and the 15th Century Plume of Feathers. The Trafalgar Way plaque is found on Fish Row at the back of the Guildhall.

Nearby attractions include the Boscombe Down Aviation Collection, Wilton House - a masterpiece of the Baroque style - and Larmer Tree Gardens.

Salisbury hosts lots of great events including the Salisbury International Arts Festival, which takes place over two weeks in the spring and has a different theme each year. Also popular is the Southern Cathedrals Festival, a music festival which alternates between the cities of Winchester, Salisbury and Chichester. Salisbury Arts Centre and City Hall both have year-round entertainment programmes. 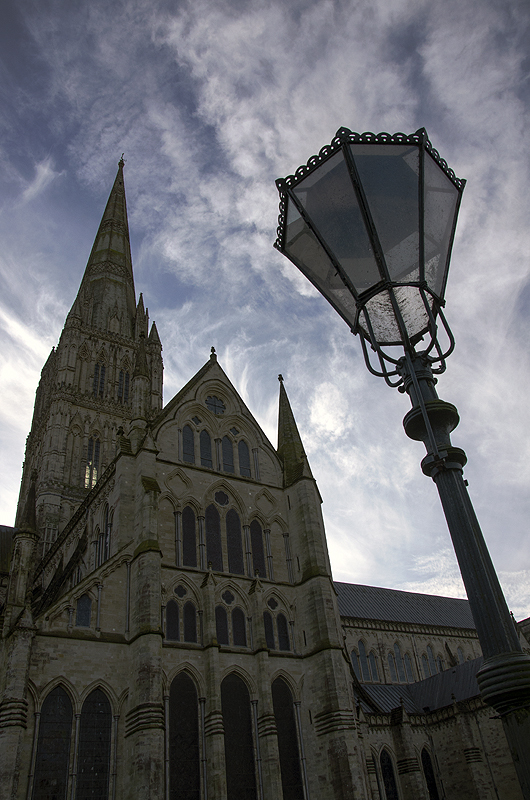 Salisbury: sure to in-spire you!

As you leave Salisbury heading north, don't miss a visit to enchanting Figsbury Ring with its amazing views back over the city and its spire.

Just south of the A30 as it heads north east from Salisbury are the three Winterslows: East, Middle and West, sited on the old Roman road between Old Sarum and Winchester. The famous essayist William Hazlitt used to come here to escape the stresses and strains of London as his wife owned a house here. At that time it boasted a 17th century coaching inn, the Winterslow Hut, where Hazlitt wrote whole books in an upstairs room.  Subsequently named the Pheasant Inn, it served as an off-base officers mess, accommodating night fighter crews from the nearby Middle Wallop airbase. This historic building has since been converted to residential use.

At Lopcombe Corner the A30 heads due West but The Trafalgar Way follows the A343 to Middle Wallop. To the east of Middle Wallop lies the Middle Wallop airfield, home to the Army Air Corps, a branch of the British Army. The base is notable for having previously served as both a Royal Navy and Royal Air Force controlled airfield. Specialising in night flying the base provided night time defence over the UK during the Blitz from late 1940 to mid-May 1941. It became a fully fledged Fighter Station as the Battle of Britain progressed.

With such a rich aeronautical history it is not surprising that the area hosts  the Army Flying Museum which tells the story of flying in the British Army.


Just south West of Andover is the hamlet and country house of Red Rice. Red Rice House was used by American forces in World War II for secret, high-level planning and was the reserve headquarters for the D Day Landings. The building became a Catholic school in 1961 and was taken over by Farleigh Prep School in 1982. The actor Rupert Everett is an alumnus.

Just two miles south west of Andover is the hamlet of Little Ann which is attached to Abbotts Ann where the first iron ploughs were developed by Robert Tasker. He later built the Abbots Ann School, one of the first in England to take children of all denominations.

From here The Trafalgar Way follows the A343 and then the Salisbury Road into Andover. 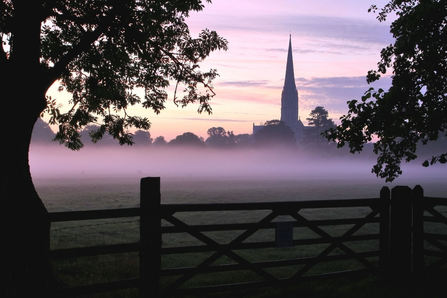 Salisbury Cathedral from the water meadows